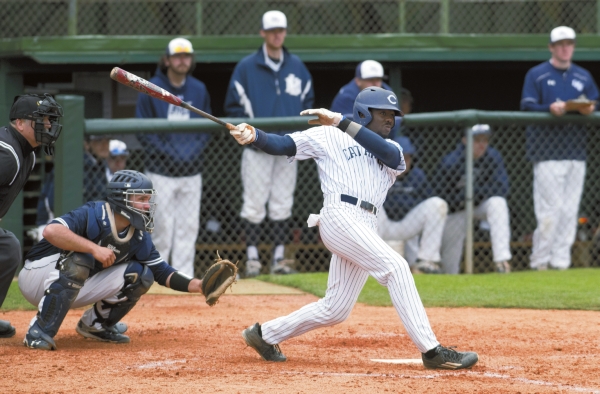 JON C. LAKEY / SALISBURY POST ... Catawba’s Malachi Hanes (11) watches his smash hit the top of the right field wall for a double during Saturday’s college baseball doubleheader with Lincoln Memorial. In addition to this double, Hanes also belted a pair of two-run homers. Catawba swept the two games, 7-2 and 9-1.

SALISBURY — Catawba’s baseball team won a three-game series the hard way, sweeping Lincoln Memorial, 7-2 and 9-1, in Saturday’s chilly South Atlantic Conference doubleheader at Newman Park.
“It was crucial for us to win this series — it keeps us in the mix,” Catawba coach Jim Gantt said. “We played good baseball and we got timely hits. Our energy and effort today were outstanding, especially after leaving 14 on base and losing (8-6) Friday.”
Freshman shortstop Jeremy Simpson had five hits in the twin bill, while Will Albertson and Chance Bowden rapped four each. Bryce Fowler, seeing his heaviest playing time all year, contributed a 3-for-7 effort.
Catawba (15-11, 7-5 SAC) finished the uplifting day tied for third place and is now only one game behind Lincoln Memorial (17-8, 8-4) and Tusculum.
Malachi Hanes put the Indians on his back in the first game. The lefty masher knocked in six with a two-run homer in the first, a two-run homer in the fourth, and a two-run double in the fifth.
“They had a good left-hander on the mound, and that lefty-lefty matchup can be tough,” Hanes said. “I was just trying to make solid contact when I hit that first homer to left-center on a fastball that was middle-out. I didn’t think I’d get another fastball and I was sitting on a change-up, but when I did get a fastball, I reacted. That’s when I hit the second homer to center field.”
Hanes got a first-pitch curveball on his third-at bat and rifled a two-run double into right field to put Catawba ahead, 6-2.
“With the wind blowing in the way it was, Newman Park played big,” Gantt said. “I just wonder how far those balls Hanes hit might have gone on a normal day.”
Lefty Russ Weiker was solid on the mound for the Indians, who used only three pitchers in the doubleheader. Weiker worked eight innings and allowed five hits.
The key moments for Weiker came in the sixth inning. Lincoln Memorial had runners at second and third with no outs and had a chance to get back in the game, but Weiker got out of the jam with a popup, strikeout and groundout. That escape proved a backbreaker for the Railsplitters.
Lincoln Memorial southpaw Ethan Elliott, who came into the game undefeated, finally got Hanes out in the seventh, but Bowden picked up his teammate with a run-scoring double.
Bryan Blanton pitched a breezy ninth to finish things off.
•••
Catawba sophomore Connor Johnson was the story in the seven-inning nightcap.
The lefty threw a complete game for his first victory since last April 12. Johnson was 5-1 as a freshman, but most of his success came early last season. Since then there have been some struggles.
“I felt like myself today for the first time in a long time,” Johnson said. “It was a good day for us. The bats were on fire. Everybody was doing their job.”
Home runs (he’s allowed eight in 27 1/3 innings) have been Johnson’s biggest issue. He allowed a solo shot to Wes Neiderland in the second inning, but he quickly put that pitch behind him and moved on the next hitter.
“My mindset was to stay locked in today, no matter what,” Johnson said. “I kept throwing with a lot of confidence.”
The brisk wind helped Johnson some, but he also helped himself with 10 ground ball outs.
Johnson calmly pitched around two errors in the fifth, and two of his sharpest innings were the sixth and seventh. He was getting contact early in the count and needed only 75 pitches to finish a three-hitter. He only struck out two, but he didn’t walk anyone.
“He got ahead, he kept the ball down and he changed speeds on his breaking ball,” Gantt said. “The biggest difference today was when something went wrong he didn’t let it bother him. He just making good pitches. He outing was a big shot in the arm.”
Simpson and Bowden had three hits each in the second game and combined for five RBIs. Jake Kimble had two doubles.
“Losing the first game of the series the way we did was a tough pill to swallow,” Hanes said. “But we came back strong today. We got two big wins, two great team wins.”
•••
NOTES: Catawba assistant coach Michael Lowman left after the first game to attend induction ceremonies for his father Bob Lowman, who entered the N.C. American Legion Hall of Fame in Liberty.