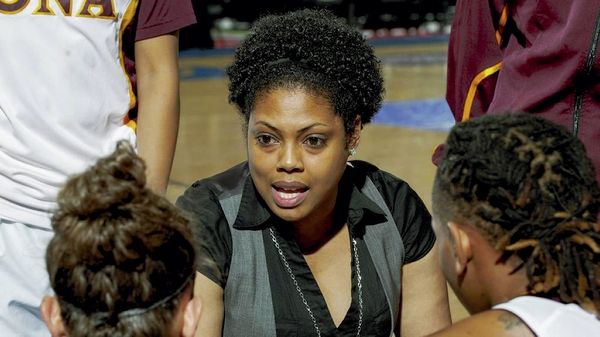 Iona women’s basketball coach Billi Godsey is not from Salisbury or even Rowan County, for that matter.

But to say to that Iona doesn’t have some local folk pulling for it today wouldn’t be accurate either.

Godsey has the Iona Gaels in the women’s NCAA Tournament for the first time, a No. 15 seed that will play No. 2 seed Maryland today at 1:30 on the Terps’ home court.

It’s a tall challenge, but a No. 15 seed on the men’s side, Middle Tennessee State, took out Michigan State yesterday and there are some local fans who hope Iona can pull off the same surprise today.

Coach Godsey’s sister, Rori, is assistant branch manager of F&M Bank on Jake Alexander Boulevard. Rori graduated from Catawba College and stayed in town, as did her sister, Shawn Squirewell, director of foster care and adoptions at Nazareth Children’s Home.

“There are six sisters in all, with just 10 years separating us in age,” said Rori. “So, we’re all very close and we’re all extremely proud of Billi.”

After Billie and Shayla comes Shawn, Rhea, Rori and the youngest, at 27, is Latisha.

The Salisbury family connection has even older roots than the sisters. Their mother is Shirley Brown Godsey, who grew up in Salisbury before marrying 1973 Catawba graduate Bill Godsey, yet another former Indian football player. Shirley is the sister of well-known retired law enforcement officer Price Brown, Betty Jo Brown, who works in the clerk of court office, and Mary Ann Brown Nimley.

Bill and Shirley Godsey moved to Baltimore in 1974 and then on to Cheverly, Md., where they raised their family of six girls. The daughters made annual trips to Salisbury in the summer to stay a week or two with their grandmother, Sally Brown. Their cousins are Vince and Thad Brown.

“I absolutely remember coming down there,” said Billi by telephone from Iona on Wednesday night. “We grew up in Salisbury in the summers. Every year, we were down there visiting our grandmother.”

All of the Godsey girls were outstanding athletes and Billi earned a basketball scholarship at Hofstra. She suffered a fracture left shin as a freshman and again, as a senior. That’s when Billi began sticking to head coach Felicia Jack (now at Buffalo) to learn the ropes of college coaching.

Bill’s first stop was in the East Coast Conference office and that led to an assistant basketball coaching position at Division II Molloy College in New York. That led to assistant stops at Maryland-Baltimore County and then Virginia Tech, before she obtained her first head job at Iona three years ago.

In her first season with the Gaels in 2013-14, Godsey led Iona to a program record 26 wins and a share of its first MAAC regular season championship. The team also had an 18-game winning streak, the longest in school history.

Now in her third season at Iona (she has Jim Valvano’s old office), Billi has the Gaels at 23-11 and in the the big dance. They earned the trip to Maryland by winning the MAAC Tournament title last week by defeating Quinnipiac, 57-41.

Godsey’s three teams have her career head coaching record at 64-32, a winning percentage of .667.

“It’s been an incredible journey,” said Billi. “We started 0-4 this year, trying to figure out our identity and we took a couple of bumps and bruises. But the girls started to feel comfortable with their roles and it really came together. Last year, we were last in the conference in defense and this year, we were first and in the top 50 in the country.”

Billi is most proud of helping Iona get to a place never reached before.

“We’re 75 years as a college and have had women’s basketball for 48 years,” continued Billi, “so, obviously, it’s a great accomplishment and we’re thrilled that our girls have that piece of history to their credit.”

Billi pointed out that the Iona men’s team also made the NCAA Tournament, although the Gaels lost on Thursday to Iowa State.

Iona is located in New Rochelle, N.Y., 30 miles outside of New York City. The team traveled on Thursday to College Park, to get ready for today’s game with Maryland.

“They’re big, they’re fast, they run … but we’re going to give it our best shot,” Billi said of the Terps.

Both Billi and Rori remember when the Iona coach’s career may have really started. The older Billi used to take her younger siblings to Cheverly’s Town Park, to show them “how to do it,” said Billi. “They probably remember it more as torture than it was instruction.”

Said Rori: “I do remember her leading us on various occasions, even at home, inside the house. We were practicing proper chest passes — in the house!”

According to Rori, big sister Billi taught her more than basketball.

“I still look up to Billi, probably more than she even realizes,” said Rori, who remembered another long ago example.

“I remember Billi coming home in middle school and speaking Spanish and I thought, ‘wow, how come I don’t speak Spanish yet?’ She was learning it in school and she would come home and show what she knew, and that made me want to learn it too,” said Rori. “That sort of drove me to really pay attention when I got to learn that language and I became fluent in it and, of course, use it a lot now.

“So she inspired me, not just athletically, but educationally as well,” added Rori.

Rori also said that no one who knows her sister Billi is surprised by her success.

“Anything that we did, we put our all into it, but there was something about basketball that was different for Billi,” said Rori. “We knew that she was going to be the one to excel in basketball, because of the passion that she had for it. And that passion has only grown over the years.”