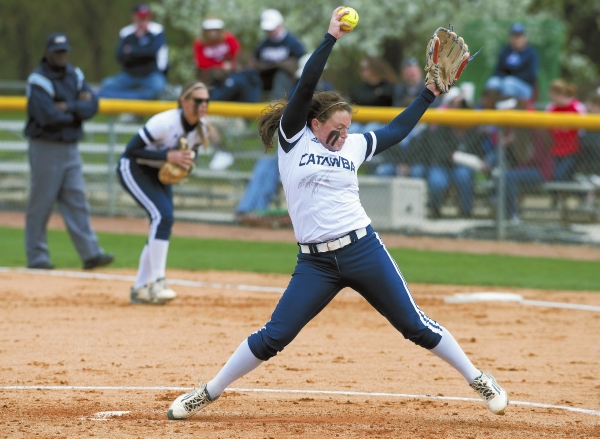 JON C. LAKEY / SALISBURY POST ... Catawba senior Carley Tysinger winds up for a pitch during Saturday’s action against Brevard at Whitley Field. Tysinger fired a no-hitter at the Tornados in the first game of a doubleheader. Tysinger pitched both games as Catawba won, 3-0 and 3-1.

The Lady Indians kicked off their league schedule by sweeping a doubleheader from visiting Brevard, winning 3-0 on a Carley Tysinger no-hitter in the first game and using a three-run first inning to prevail, 3-1, in the nightcap.

“Two wins,” longtime coach Nan Whitley said through a shiver after Catawba (18-9 overall) extended its winning streak to three games. “We were slightly disappointed that we didn’t produce more runs and more hits. We were hoping for double digits in the second game, when we started out strong … and then went cold.”

It hardly mattered. Catawba had more than enough offense to outscore Brevard (10-18, 0-2), which managed six hits against Tysinger in Game 2. Her first-game performance would have had pop singer Michael Jackson moon-walking.

“I felt a lot better today than I have in the past,” the senior right-hander said after pitching her second career no-hitter and the eighth in school history. “I felt like myself.”

Tysinger worked efficiently and with visible confidence in the opener, working all four corners of the plate and forcing Brevard’s hitters to change eye levels. She threw only 89 pitches, struck out 15 and walked none. Brevard’s only baserunners were the four batters who were hit by pitches, which tied a Catawba school record. Two of them came with two away in the top of the first inning, after she had fanned consecutive hitters to start the game.

“She wasn’t trying to put it over the plate,” explained catcher Taylor Adams. “She was trying to come inside against some of their stronger hitters.”

Tysinger escaped the first, then found a rhythm that gave the visitors the blues. She retired 16 of Brevard’s last 17 batters — including 14 in a row before Hanna Huckabee was hit by a pitch with one out in the seventh inning. Support came from Morgan Brann — who lofted a first-inning sacrifice fly — and sophomore Delane Smith, who drilled a two-run homer in the last of the third.

“It was an inside pitch, which is my favorite,” Smith said after sending a 3-2 pitch from Brevard’s Jamie Hrobak over the left-field fence. “I just saw it, liked it and swung.”

The game ended when Tysinger fired a third strike past Brittan Miller, but not before the no-hitter was nearly spoiled one pitch earlier. Miller lined a 3-2 pitch down the right-field line that landed just inches foul.

“It was definitely foul,” said Brann, Catawba’s first-baseman. “The umpire made a great call.”

Whitley noted that Tysinger missed several practices during the week to attend an American Chemical Society convention in San Diego. “She’s only practiced two days” the coach said. “We weren’t sure how things would work out. But she looked all right and we stayed with her.”

Catawba’s momentum carried over into the second game. Tysinger pitched another complete game, struck out 11 and walked two. The Indians jumped on Hrobak for five hits in the first inning — singles by Caroline Turner, Kristen Stinnard and Gina Gerone sandwiched around Smith’s run-scoring double off the center-field fence and Brann’s two-run home run to left.

“I had to go on a trip this week, so this was definitely a test of endurance,” Tysinger said. “I wasn’t so much worried as I was concerned how it would turn out. I pitched the same in both games, no matter what the score was. But it was nice to have some runs early in the second game.”

A senior from Lexington (Central Davidson HS), Tysinger entered the season already owning all the Catawba strikeout records — game, season and career. She now has 1,099 career strikeouts and 29 shutouts.

Brevard scored its only run of the day in the top of the second when Ashleigh Ivey legged out a bunt single and eventually crossed on a two-out wild pitch.

“We’re excited to start 2-0,” Whitley said. “Our whole conference is competitive and we have tough games every time we walk out on the field.”

NOTES: Catawba plays a double header at Newberry on Tuesday and hosts Carson-Newman for two on Friday. … Turner went 3-for-3 and scored twice in the opener. Brann had three hits in the nightcap. … Tysinger had a no-hitter two years ago but lost, 1-0, to Bellarmine. She also combined with Turner on a no-no on Feb. 27, again against Bellarmine.