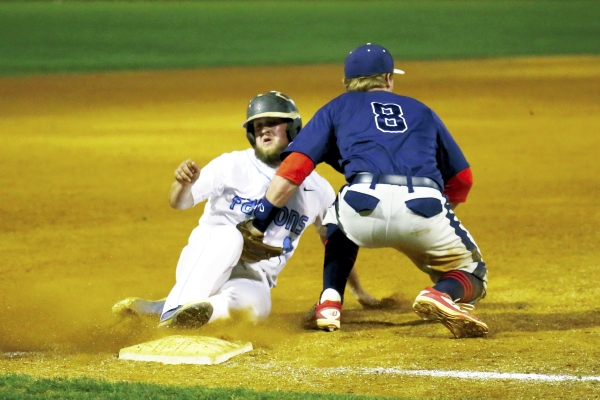 James Sipes/for the Salisbury Post ... East Rowan third baseman Jackson Justus (8) tags out West Rowan’s Jonathan Luther during Friday night’s high school baseball game at Mount Ulla. Luther had tried to advance to third base after a bad throw to first base. The Falcons won the game, 4-3, on a bases-loaded walk.

MOUNT ULLA — The last pitch of Friday’s game was a 3-1 fastball served up by East Rowan’s John Owen with two out, the bases loaded, and the score tied.
In that situation, Owen couldn’t afford to to mess around, and he didn’t.
Catcher Trevor Scruggs had set up in the middle of the plate, and he didn’t have to move his mitt. The pitch to West Rowan’s Bryan Ketchie, a young man of normal height, didn’t appear to be high or low, inside or outside.
It was a pitch that’s almost always called a strike, but it was ruled ball four. Credit Ketchie with a walk-off walk and a game-winning RBI and credit West Rowan with a 4-3 South Piedmont Conference win that will be discussed for a while.
East fans left the ballpark dismayed. West fans were happy — but stunned.
It was a fateful final pitch that could ultimately decide the SPC race. Both teams entered the game tied for first place.
Even winning coach Seth Graham, striving for diplomacy, searched for the words to describe the game’s abrupt ending.
“You kind of hate to win a game like that,” Graham said. “But that’s baseball. Things happen. If that last pitch is called a strike, it’s a 3-2 count, and we’ll never know what would’ve happened on 3-2.”
East players and fans would’ve been glad to take their chances.
East coach Brian Hightower kept his composure in a difficult situation.
“To lose on that pitch is just impossible,” Hightower said.
Most of the night belonged to West starting pitcher Austin Love, who went the distance with seven strikeouts, and to surprise West slugger Jonathan Luther, who lashed three of West’s seven hits, including two doubles.
“I’ve been struggling because I’ve been swinging out of my shoes,” Luther said. “I was just trying to put it in play tonight and it worked out.”
The Falcons (7-2, 5-1 SPC) took a 3-0 lead against East lefty Hayden Setzer in the third. An error opened the door. Singles by Olen Stamper and Luther followed. Next came two walks, with Setzer’s night ending on his free pass to Caleb Link with the bases loaded.
Jordan Wise relieved Setzer with the bases full and no outs. He limited the additional damage to a Trevor Atwood sac fly and kept the Mustangs (6-2, 4-2 SPC) in the game.
East scratched out a run in the fourth against Love, but the hard-throwing junior, a UNC commit, put zeroes on the scoreboard in the fifth and sixth, as the Falcons held that 3-1 lead.
“I didn’t have very good command early,” Love said. “But then I started feeling pretty good.”
Love wanted to finish, and Graham wanted him to finish. Graham sent Love back to the mound for the seventh.
Chandler Antosek doubled down the third-base line to start the inning for East, but then Love got a fly ball and a ground ball from the Mustangs’ two most dangerous hitters, Owen and Ike Freeman. Freeman’s bouncer moved Antosek to third, but now Love was only one out away from victory.
Chandler Blackwelder kept East alive. He has good speed and he was able to beat out an infield hit as Antosek scored to make it 3-2.
Jackson Justus was next, and he may have put the best swing of his life on a Love fastball. He nearly hit a two-run homer to right field. West’s Lee Poteat almost made a circus catch, but the ball eluded him as he crashed into the fence. Blackwelder scored easily, and Justus had a game-tying triple.
“The guy who was on first (Blackwelder) can run, and we thought he might try to steal second,” Graham said. “Austin was trying to be extra quick to the plate, and we didn’t make the pitch we wanted to.”
Love thought the ball might be gone when it screamed off Justus’ bat.
“It scared me,” Love said.
Wise nearly punched a ground ball through the right side for a go-ahead single, but the Falcons got the third out and came up to hit in the bottom of the seventh against a new East battery. Owen, East’s ace, went from catcher to the mound, with Scruggs taking over catching duties.
Love had a single in the decisive rally, and with two out and two on, Luther came to the plate.
After getting down 0-2, he staged a long battle with Owen. Then he drew the walk that filled the bases for Ketchie. Owen tried to fool Luther a curveball on 3-2, but it was up and in.
“That was a great at-bat by Luther that put the pressure on them,” Graham said. “Ketchie was next, and Ketchie has a good eye.”
East fans howled on Owen’s 2-1 pitch to Ketchie. It was around the knees, maybe a borderline strike, but maybe a little low. Graham thought it was a bit low.
Next came the 3-1 pitch from Owen that ended the ballgame.
“I love the way we battled tonight and I love my team,” Hightower said. “We just needed to play better defense. If we do that, we win.”