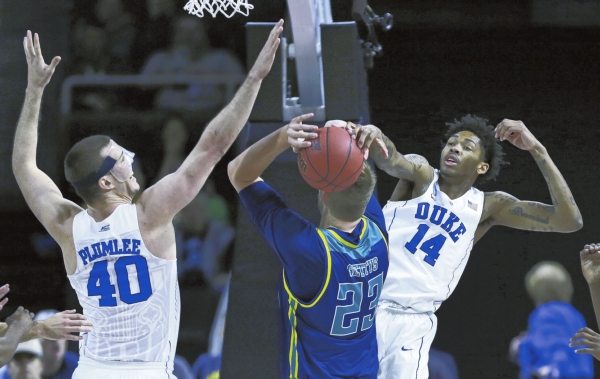 Duke guard Brandon Ingram (14) and center Marshall Plumlee (40) double team North Carolina-Wilmington center C.J. Gettys (23) and block his drive to the basket in the first half during the first round of the NCAA college men's basketball tournament in Providence, R.I., Thursday, March 17, 2016. (AP Photo/Charles Krupa)

PROVIDENCE, R.I. (AP) — After Marshall Plumlee jettisoned the mask guarding his broken nose during Duke’s awful opening against upstart UNC Wilmington, he entered the locker room at halftime and gave his teammates a short message: “I got you.”

Plumlee finished with a career-high 23 points to lead the defending national champion Blue Devils to a tough 93-85 victory on Thursday in the first round of the NCAA Tournament.

The Blue Devils’ big man was relegated to just four points in a first half dominated by the Seahawks. A little tirade from coach Mike Krzyzewski helped right the ship.

“There’s no excuses for my play in the first half,” Plumlee said afterward in the quiet Duke locker room, wearing a blue jersey with the words “Be Worthy” emblazoned on the front.

“I’m grateful to have a coach that can bring out the best in me,” he said. “More than anything, I had teammates that played harder, teammates that gave me energy, and I fed off of that.”

Plumlee had 10 of his points and two blocks early in the second half as the West’s No. 4 seed stepped up the defensive pressure to overcome a four-point deficit and build a lead that proved too much to overcome.

“I couldn’t be more proud of a group of guys that have laid it out on the line for me for 33 games this year,” second-year UNCW coach Kevin Keatts said. “We talked about it in the locker room, and one of the things I said to those guys is when we leave this locker room, I want you to hold your head up. I know we’re all big-time competitors and we all hate to lose, but the effort that these guys have given me all year long is unbelievable.”

Grayson Allen also scored 23 points for the Blue Devils, but 15 came from the foul line as he shot just 4 of 12 from the field. Freshman Brandon Ingram, likely playing in his only NCAA Tournament, added 20.

With Duke trailing 43-40 at halftime, a lay-in and two free throws by Ingram sparked a 14-3 run. Plumlee followed a miss by Ingram then hit two foul shots, and Ingram’s lob to Plumlee gave the Blue Devils a 61-49 lead with about 14 minutes left.

The Seahawks got mired in foul trouble — they picked up their 10th midway through the half — and that was a lot to overcome.

Still, after Plumlee picked up his fourth foul with just over six minutes to go, Ponder rallied the Seahawks. He hit a 3-pointer — UNCW’s first made 3 in 10 tries in the half — then had a steal and layup. A three-point play by Bryce narrowed the deficit to 78-73 with 4:42 left, but Plumlee’s offensive rebound and slam put Duke back up by seven.

UNCW shot 51.5 percent in the first half, including 6 of 12 from beyond the arc, while hounding the Blue Devils into mistakes with its press.

DUKE: The Blue Devils committed only four turnovers in the first half, but nearly every shot was challenged, and that showed in three missed layups when the ball caromed too hard off the glass because of the defensive pressure. … Duke shot 43.8 percent and was 3 of 10 from beyond the arc in the first half.

UNCW: The last time the Seahawks faced a No. 4 seed in the NCAA Tournament was in 2002, and they upset Southern California 93-89 in overtime for their only tournament victory. … UNCW is 2-38 all-time against teams in the ACC.

Duke: A second-round game against Baylor or Yale on Saturday.