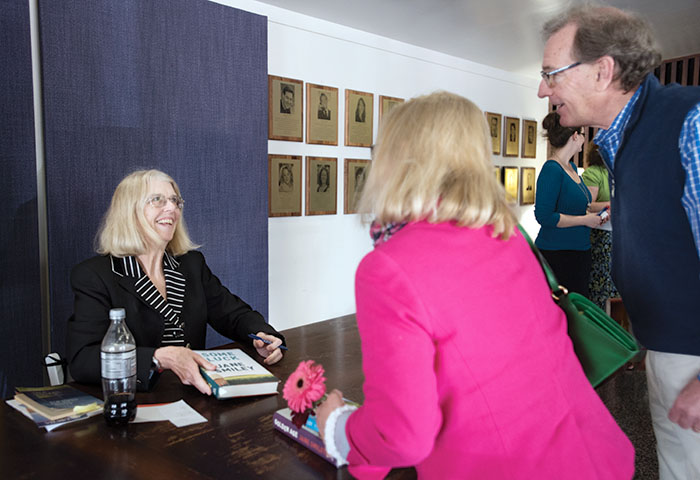 ALLISON LEE ISLEY/SALISBURY POST Jane Smiley signs some copies of her novels for Owen and Elizabeth Norvell in the lobby of Keppel Auditorium at Catawba College in Salisbury on Thursday morning, March 17, 2016. Smiley is a Pulitzer Prize winning author and is the featured speaker for Catawba's 30th Annual Brady Author's Symposium.

Jane Smiley didn’t live in Iowa her whole life, but its farmlands have inspired her work.

And she calls Ames, Iowa, where she lived for a few years, paradise. “It had wonderful daycare and across the street was a store and the students were wonderful.”

Speaking at the 30th annual Brady Author’s Symposium, she read some of her Last Hundred Years trilogy, which follows a family from farm to city back to the farm and then to the wider world.

She said she knew when she started that the books would cover 1920 to 2019, and she knew first son Frank would be born in 1920, but as she wrote and did more research, things changed.

She learned about what is called the pothole prairie, partially in Iowa, that was the result of what had been a post-glacial swamp.

The first immigrants, from England, were used to swampy ground, and developed ways to work it. That’s why people speak of a sea or ocean of grass, because they remembered their journey across the Atlantic.

Once chemicals and altered crops were introduced, the swamp ran dry and the water became dangerous to drink.

When she moved to Iowa, Smiley’s first thought on farming was fear. She knew about DDT and its dangers. Then she moved to Ames, and it was farm central, with cheap houses, great students and great subjects at the university.

“Without farming, we couldn’t eat, we’d have nothing to wear, nothing to sleep on, the horses would starve. … You can only buy books because farming exists,” she said.

She believes that in the last 10 years, some of the greatest, most sinister changes have been in farming.

Walter and Rosanna, in book one of the trilogy, “Some Luck,” grow enough food to feed themselves and to sell to others, sometimes making a profit.

Smiley then read passages from “Some Luck” as Walter reflects on how useful oats are, to feed the family and the livestock. In those days, neighbors came to help with each other’s harvests. Later in the trilogy, a grandson loses the farm. The land is worth $10,000 an acre, but it’s not good for farming any longer — the topsoil is gone.

“There’s so much pressure on farmers as the population grows,” Smiley said. She then read the 2016 chapter from “Golden Age,” her latest book and the final one in the trilogy. “I was writing this in 2013, so it may be a little off.” In the passage, she bemoans all the things poured into the soil, all the petroleum products, because the soil is so depleted … the aquifer is affected.

Smiley thinks there will be a bust, and a sudden one, where we will have to find a new paradigm for farming. “I had an opinion when I started the trilogy, it modified slightly.”

“I don’t think novels change the world like they used to. Some may make you think, but that’s all.”

In writing the trilogy, she knew she had to get the children born, and she gave each one of them an immediate and distinct personality. Frank listened to no one; Joe clung to his mother; Lillian was a saint.

“I sent them out into the world and I knew they’d fail. … I’m their god and I gave them free will.”

Her Pulitzer Prize winning novel, “A Thousand Acres,” is a retelling of “King Lear,” Shakespeare’s play about an old king and his daughters. The book is told from the perspective of Goneril and Regan, the daughters who don’t get to present their perspective in the play.

Smiley said she could write that book because she lived in a gossipy family. “I had a big family who would tell stories about the old days” then another relative would tell their version of the story.

“You need a gossipy family. You have to hear their voices and the difference between them. You learn that stories are interesting and you eavesdrop.”

She gives her class an eavesdropping assignment: Write two pages of what you overhear. “It makes their dialogue better.”

Smiley said you have to spy, eavesdrop, see what’s in other people’s bags to learn about them. You listen to conversations on the plane.

“In my family, there was no complaining; it was all storytelling and here’s this old guy,” Lear, going on and on and on, so she began studying it to see what was there.

Her ideas come from anywhere, everywhere, something just strikes her.

Someone asked her if we’ll ever know what’s really in our food.

“It depends on the election,” she said.