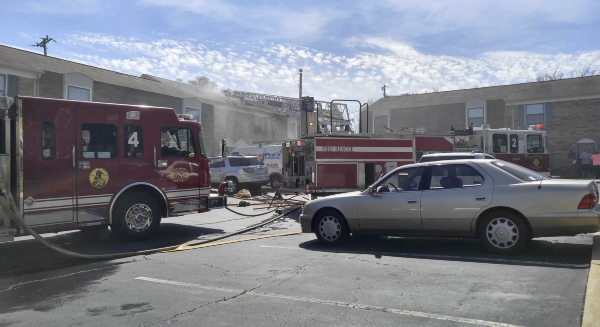 Tina Webb, a tenant at Rolling Hills townhomes was able to get out of her residence unharmed after she says a crew working on her air conditioning/heating unit told her they unknowningly caused a fire in a wall there. Shavonne Walker/Salisbury Post

Tina Webb was awakened Thursday by a crew making repairs to her air conditioning unit after they unknowingly caused a fire inside in a wall inside her Rolling Hills townhome.

“They knocked on the door to tell me to ‘get out, the building is on fire,’ ” she said.

The VA Medical Center nurse works third shift and was sleeping when the crew was making repairs to the system. She’d just moved to the townhomes in October. She had just enough time to grab her purse, cell phone, and nursing bag. She was not harmed.

The fire department had not made a final assessment, but Webb believes her home is a total loss. She lamented about losing her medical scrubs and other belongings.

Fire crews were called to the scene shortly before 12:30 p.m. to the townhomes, located at 315 Ashbrook Road, near Sycamore Road. The property backs up directly behind Hendrix Barbecue on Statesville Boulevard and is  within the Westcliffe subdivision.

Around 1 p.m., Salisbury City Fire Battalion Chief David Morris said fire crews had the bulk of the fire knocked out. He said the fire was in the wall and it reached the attic. The fire was contained to unit 36 where Webb lives.

The units are separated by a fire wall so firefighters had to go into the walls and ceiling to make sure there was no fire inside.

Morris said there were a couple of pets that officials were able to get out of the home next door. Webb said her neighbor has two dogs. The dogs were not harmed.