Before you wreck the system, understand it 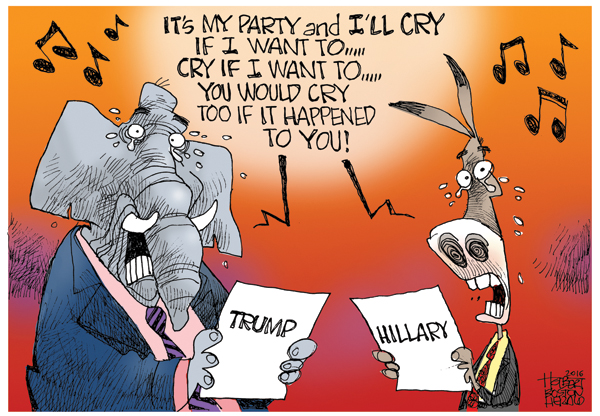 If there’s a theme that sets this political season apart, it’s the voters’ utter disdain for most of the people who practice politics. They’re fed up with politicians, they’ve lost faith and confidence in the political elite, and they don’t believe that the realm where politicians ply their craft — government — works.

The two presidential contenders who have most channeled this frustration, Donald Trump and Bernie Sanders, have electrified many voters who want to get this message across. They’ve mobilized new voters, people more mainstream politicians haven’t reached. The involvement of more Americans in the political system, though it unsettles the old order, is bracing.

There are many legitimate reasons for these people to be turned off by the political system today. But I’d argue that if you’re hell-bent on shaking up the system, you also need to understand it — and understand that certain features are likely to persist no matter how hard you try to change them.

The first is that it is very hard to make our representative democracy work. We make progress incrementally, over years if not generations. The first president to press hard for affordable, accessible health care was Harry Truman. It’s taken us that long even to get close — and no one would argue that the work is done.

So you have to approach politics with great patience. Our system discourages the rush to judgment — it puts a premium on including as many voices as possible, which takes time in a complicated country. The process is inevitably slow, noisy and messy, the results fully satisfy no one, and more often than not the best we can do is to muddle through.

Which is why in our system, there’s rarely a sense of completion. The work — on health care, taxes, the environment, you name it — is never done. Nothing is ever finally settled. There is no ultimate solution.

Many people are also turned off by what lies at the center of our system: deal-making. This involves a clash of ideas in the public arena, compromise, and negotiation, which make a lot of Americans uneasy. Yet it’s how we resolve our differences — and has been since the first day of the United States’ existence.

So politicians who insist on purity impede solutions. There ought to be a healthy tension between idealism and realism, but we have to find a pragmatic way to combine them. We have to consider different points of view, the intense involvement of special interest groups, and in many cases the robust interest shown by ordinary citizens. This makes it challenging to come to an agreement on complicated issues, but it’s necessary to keep the country from coming apart.

Congress in recent years has reached new levels of polarization and failure to address the major issues of the day. In public meetings, I often encounter a yearning for leadership to solve all our problems, usually along the lines of, “Where are the Abe Lincolns of our day?” Sadly, it’s a false hope. Our problems are made by us and have to be resolved by us. Abraham Lincoln’s not around any more.

We cannot look to government to solve all our problems. Indeed, we live in an era in which government faces more and more problems it cannot effectively deal with. Increasingly, citizens have to step forward and fill the void that government leaves. The relevance of the citizen increases every day as power is more diffuse, technology empowers individuals, and social media allows more citizens to express their views, vent their frustrations, and to mobilize organizations.

We may well be moving into the century of the citizen. I think of the woman who got rail-crossing signals fitted out at dangerous intersections in Indiana, after her daughter was killed at a rail crossing with no signals. Or of my neighbor, who helped build a movement to press for accurate labeling of food ingredients, because he was diabetic and had no way to know the sugar content of goods. Our communities and lives are better because of citizen action. Indeed, unless citizens boost their involvement and contributions, many of our problems will not be solved.

Lee Hamilton is a senior advisor for the Indiana University Center on Representative Governmen. He was a member of the U.S. House of Representatives for 34 years.