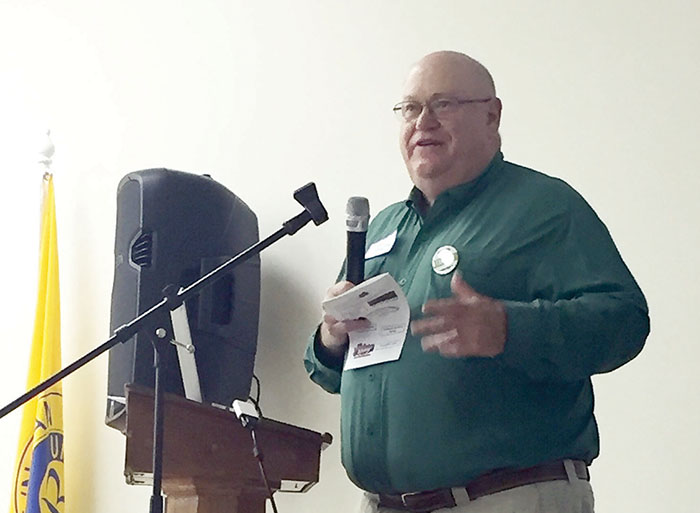 Amanda Raymond/Salisbury Post Joe Hampton, superintendent and research operations manager at the Piedmont Research Station, was the keynote speaker for the Rowan County Chamber of Commerce's Salute to Agribusiness at the Millbridge Ruritan Club on Thursday. His speech was about the past, present and future of agriculture.

This is the first time in the history of the world that a civilization does not have to worry about food production, and that is a big accomplishment for agriculture, said Joe Hampton.

The Rowan County Chamber of Commerce held its third annual Farmers’ Appreciation Breakfast on Thursday at the Millbridge Ruritan Club.

Hampton, superintendent and research operations manager at the Piedmont Research Station, was the keynote speaker.

Though both events have been held before, this year was the first time that the Chamber’s salute to Agribusiness and Farmers’ Appreciation Breakfast happened together, and all during National Agriculture Week.

All of the food at the breakfast was locally sourced.

Amy-Lynn Albertson was introduced as the new Rowan County extension director, a title she gained in December. She has worked for the N.C. Cooperative Extension since 2001.

“I’ve spent the last 15 years in Davidson County, but I feel like Rowan is going to be my home,” she said.

Albertson introduced Sam Oster and Hailey Ziegelhofer, who are the Rowan 4-H’ers of the year. 4-H is a youth development organization.

“We are very excited to have them as our ambassadors for Rowan County 4-H this year,” Albertson said.

Before the keynote speaker, Beverly Hampton, who works with the U.S. Poultry and Egg Association, provided information on genetically modified organisms, or GMOs, and going cage-free. As far as GMOs, Hampton said there are only 10 GMO seeds sold in the country.

“So if you see someone who talks about, I don’t know, say a strawberry, and how big it is and that’s because of GMOs, no, not happening,” she said.

Next, keynote speaker Hampton, Beverly Hampton’s uncle, talked about the past, present and future of agriculture.

“There has been civilizations that have gone out of existence because of their food supply,” Hampton said. “Civilizations have relocated, wars have been fought over food, and it’s something that we don’t think about.”

Hampton worked at both the Salisbury facility and the Upper Piedmont Research Station since 1981. He was named superintendent in 2004. Hampton is a graduate of N.C. State University.

Hampton said that the state has about $13 billion in farm gate receipts because farmers are able to add value to their products.

“In North Carolina, we don’t sell chickens to the consumers, we sell them a product ready to eat,” he said.

“This year, Rowan County has set records for wheat production in this county,” he said.

Hampton said to feed a predicted population of 9 billion by 2050, farmers will have to do things like double production, improve the soil and enhance utilization by reducing waste.

“Every one of those (people) is going to want to eat breakfast and lunch and dinner,” he said. “And that’s a big deal.”

The next Power in Partnership Breakfast’s theme will be health care, and it will be held on April 21.