Ride for Jesse: Pastor says, ‘I can’t help my kid, but maybe I can help somebody else’ 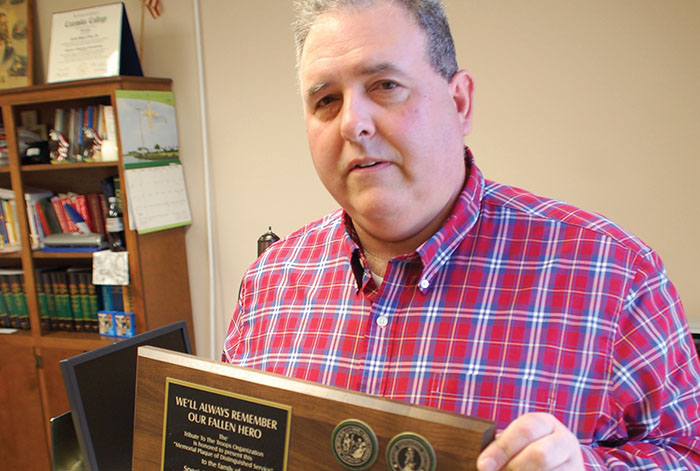 Mark Wineka/Salisbury Post The Rev. Carlin Ours, pastor of Organ Lutheran Church, holds a plaque given as a memorial to his son, veteran Jesse Ray Ours, who committed suicide in 2013. Carlin Ours blames post-traumatic stress disorder for his son's suicide.

ROCKWELL — During his year of combat in Iraq, Jesse Ray Ours saw things no man should have to see.

“He didn’t come back the same person,” says his father, the Rev. Carlin Ours.

Jesse Ours was an infantryman engaged in a devilish area about 90 miles south of Baghdad — in the swampy part of Iraq. Members of his unit called themselves the Swamp Dogs.

Jesse told his father about hearing the screams of his fellow soldiers inside a burning personnel carrier, which had been ripped apart by a roadside IED. When he finally could get to the men, Jesse pulled out his sergeant who begged Jesse to put him out of his misery.

The sergeant would not survive.

Carlin Ours retells Jesse’s story of his having to kill an Iraqi man and a little girl who kept moving toward Jesse’s unit, as if on a mission of destruction. “The guy just kept coming and coming,” Carlin Ours says.

“Why didn’t they stop?” Jesse later asked his dad.

Then there was the street kid Jesse’s unit befriended. He had a tumor on his back, and he was among the children often begging for candy. Guys in Jesse’s unit would at times share their rations with the boy, and once they allowed him to ride with them.

A week later, Jesse heard that Al-Qaeda had tortured the boy, burned him and disemboweled him for having fraternized with the enemy.

“You can understand that kind of messes you up as a kid,” Carolin Ours says of the images Jesse carried with him. “That’s war. That’s the way it goes.”

On April 22, 2013, several years after Jesse had returned from his one tour of duty in Iraq, he committed suicide. He shot himself at age 23.

“You go numb,” says Carlin Ours, pastor of Organ Lutheran Church. “… You never get over it. You learn to live with it.”

He agrees with the description he once heard that it’s like a sniper bullet from 5,000 miles away.

After a long time of grieving, Carlin Ours began talking with Jesse’s younger brother, Cory. Cory had been with the same N.C. National Guard unit (based in Whiteville) as Jesse. But Cory never had to go to the Middle East.

They knew Jesse had suffered from post-traumatic stress disorder and had never successfully found the care he needed. How could they honor Jesse’s memory, while helping others who are fighting PTSD?

“I can’t help my kid, but maybe I can help somebody else,” Carlin Ours says. “I don’t give up very easily.”

On May 7,  Ours has planned a charity ride and day’s worth of events at Organ Lutheran Church. The main event, “Jesse’s Ride for PTSD,” will be a one-and-a-half-hour to two-hour ride through Rowan County.

Ours expects plenty of motorcycles from groups such as Rolling Thunder and the Patriot Guard, but he says any vehicle that’s road worthy can participate.

Proceeds from the the event go to Honor One, whose Products for Good honor soldiers and veterans. But Ours says it also has a mission to help at least one person a month in his or her fight with PTSD.

PTSD doesn’t just happen to combat personnel. It can be a police officer or a firefighter who is affected.

People who have survived accidents, natural disasters and domestic violence also can have the disorder, Ours says.

He hopes the May 7 gathering also will offer a “ruck run,” in which men will be carrying 50-pound packs and women, 30-pound packs. In addition, “The Shive Shuffle,” a run/walk of about 4.5 miles, will be conducted mostly on Shive Road.

There will be food and refreshments, cornhole and horseshoe tournaments, live music, martial arts and ballroom dancing demonstrations, a bounce house for kids, plus antique cars and trucks.

“Everything will start and stop here (at the church),” says Ours, who is still finalizing plans. “Jesse’s Ride for PTSD” has a Facebook page which will be posting more details in coming weeks.

Carlin Ours says he wants to make it an annual event, and he has received considerable help already from Faith Legion members, his congregation and Powles Funeral Home.

A West Virginia native, Ours is an Army veteran himself, who wasn’t ordained as a Lutheran minister until 2011, when he was 45. Organ Lutheran is his first call.

Jesse Ours participated in ROTC at South Rowan High, and it wasn’t long before he enlisted after graduating from South.

“He couldn’t stay here when all his friends were over there,” Carlin says.

Jesse’s tour in Iraq touched 2009 and 2010, when “The Surge” was going on. Ours says his son was forced to kill a lot of people. “They said it was a hellhole,” Ours adds.

On his return home, Jesse had a failed marriage that lasted only a couple of months. He attended Rowan-Cabarrus Community College briefly but eventually told his father he had to get away. He went to live with his mother in West Virginia.

Ours saw his oldest son on a downhill slide. He was drinking. He was depressed. Ours thinks Jesse had trouble dealing with survivor’s guilt. He was internalizing everything and found it hard to decompress.

In West Virginia, Jesse enrolled in Eastern West Virginia Community College, planning to study biology. He loved hunting and fishing and the outdoors in general. If he earned an associate degree at the community college, Jesse talked about enrolling in wildlife management at the University of West Virginia.

“There were times when I thought he was doing better,” Ours says.

One of the reasons Jesse’s suicide surprised him was that Jesse had talked to Carlin about going on a fishing/camping trip with friends. In hindsight, Carlin thinks the bombing at the Boston Marathon triggered something within his son.

He didn’t know it until after Jesse’s death, but his son had started sleeping with a pistol under his pillow.

Carlin Ours last talked to Jesse on April 16, 2013. He was on a home pastoral visit, giving communion when Jesse called, so he didn’t have a lot of time beyond telling Jesse that he loved him.

Six days later, Carlin was visiting the Oak Park retirement community, again giving communion to several residents, when Cory called with the news of Jesse’s suicide. You really do go numb with news like that.

The idea for a charity ride has crystalized over the past year, especially after hearing about the Honor One program. A visit one Sunday afternoon last October from several hundred people riding with the Tribute to the Troops Organization sealed the deal.

The group presented Carlin Ours with a “Memorial Plaque of Distinguished Service” in Jesse’s honor.

Carlin Ours says he is no expert on PTSD, but he is willing to talk to any civic group or school to raise awareness of the problem.

“And help people understand this is real.”

The luck of the Irish — and Izzy