Denise Hallett named president of United Way Board of Directors 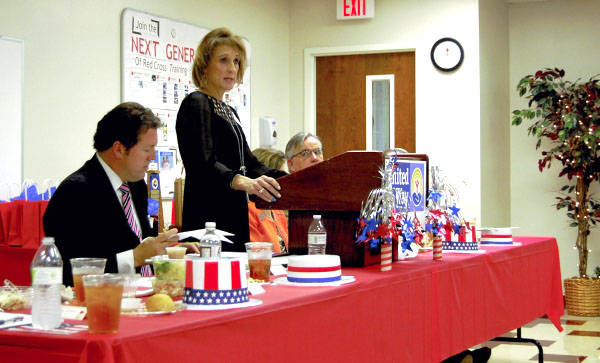 Penny Greer-Link is chairwoman of the 2016 United Way campaign.

Denise Hallett, former vice president of planning, has been named president of the Rowan County United Way board of directors.

The United Way held its 2016 Annual Meeting of Membership on Wednesday at the American Red Cross.

During the meeting, Hallett, government and business relations manager at Vulcan Materials Company, was voted in as the new board president.

Hallett said she felt confident in the board that was chosen.

“I know we’re in good hands because everybody that is serving on this board are such compassionate, loving people about the United Way,” she said after the meeting. “It’s going to make my job so much easier.”

Though the goal was not met, Penny Greer-Link, chairwoman of the 2015 campaign, said she is still optimistic.

“Though we did not meet goal, I can take comfort in the fact that God’s plan is always bigger and better than mine,” she said.

Greer-Link said the campaign was record-setting because many divisions raised more than 100 percent of their goals.

Steve Fisher, president of the board of directors for the 2015 campaign, said Greer-Link ran one of the most organized campaigns he could remember.

“We are so blessed as a community to have someone like Penny who is willing to get in the trenches and get the work done,” he said.

Fisher also said everyone involved played an important part in completing the campaign.

“All of these components come together to make up the way – the United Way, the only way, the way that we define our community,” he said.

Numerous individuals and groups were recognized during the event, and the United Way leaders thanked the room for the efforts put forth in last year’s campaign and urged them to continue support for the year to come.

“This is an individual who loves to work from behind the curtain and, wow, does he do it with grace and elegance,” Fisher said.

Dunn accepted his award over FaceTime.

As the audience prepared to leave, Hallett charged them with two goals: share the United Way story with a friend and continue supporting the United Way in order to serve those in need. The audience responded to both charges with resounding yeses.

Most Employee Spirit – City of Salisbury and Rowan County

Last year’s officers and outgoing board members were recognized, as well as the car dealerships that donated a car for the drawing: Ben Mynatt Nissan, Cloninger Ford, Gerry Wood Auto Group and Team Chevrolet.

The luck of the Irish — and Izzy