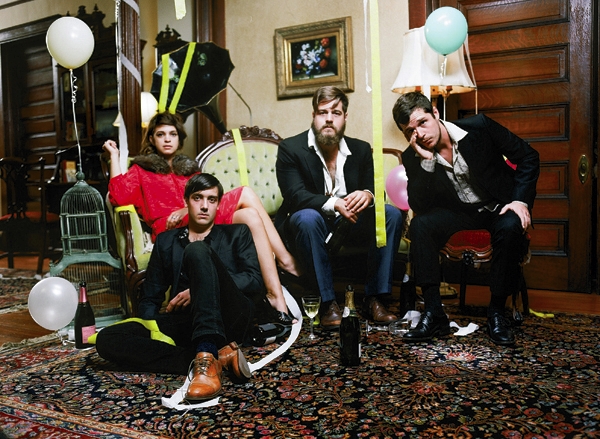 By Glenn Hudson for LSt

One of Salisbury’s favorite bands, Mipso, will perform Live at Lee Street theatre Friday, March 18 at 7:30 p.m. Tickets are $20 plus tax and doors open at 7 p.m. The band is touring to promote their album, Old Time Reverie, which was released last fall.

Mipso is regularly one of the most poplar shows of the year at Live at Lee Street theatre. That is partly because the string band’s version of Americana-style folk music is getting rave reviews across the country from both audiences and critics alike. It is also due to the fact that the band members from Chapel Hill, have many friends here. And those fans treat every performance as a great reason to have an incredible time. They are very much Mipso’s hometown crowd.

Mandolin player Jacob Sharp is from Morganton. Upright-bass player Wood Robinson and violin player Libby Rodenbough are both from Greensboro, while Joseph Terrell, who plays guitar, is from High Point.

Sharp says that there is absolutely a special energy about Salisbury and the shows that Mipso plays here.

“We do feel that Salisbury has a unique energy,” he said. “We do big shows all across the country. But Salisbury stands out. We talk about it amongst ourselves throughout the year. It’s really the first place we showed up when we started touring where we sold out and the audience was familiar with us musically. They knew the words. We knew there was something going on here. It’s great to know we can have this type of connection with a community. Salisbury is a stronghold for us and an encouraging place to play music.”

The Easter Bunny Express is a 25-minute train ride around the museum’s 57 acre historic property while the big bunny rides along, handing out treats and taking photos. Following the ride, ticket holders can enjoy temporary tattoos, crafts, coloring and pictures with the Easter Bunny, bubbles and chalk, Thomas play tables in the Roundhouse, face painting, and a great model train layout from the Central Carolina N-Scalers.

A new addition to this year’s event is Meals With the Easter Bunny, with the choice of breakfast, lunch, or snacks, enjoyed in a stationary vintage railroad dining car.

The museum’s big Easter Bunny Express finale happens Saturday, March 26, with all scheduled activities, as well as the annual Easter Egg Hunt at noon and an appearance by the Lehigh Valley #126 steam locomotive. The egg hunt is for children through age 10, divided by age.

Also March 26, guests will hear that whistle that only a steam locomotive can make, as the Lehigh Valley Coal #126 steam locomotive will pull the museum’s caboose train. Six colorful cabooses will travel behind this authentic steam engine, created in 1931.

The Mummy Treasure of Al Faiyum

STATESVILLE — Join Iredell Museums, 134 Court St., as we celebrate the grand opening of The Mummy Treasure of Al Faiyum on Saturday, March 19 from 10 a.m. to 5 p.m. The event will feature North Carolina’s only Egyptian mummy, known as Margaret the Mummy. This also marks the beginning of our “Mummy and Me” programs on Saturdays from 11 a.m. to 1 p.m. and from 2 p.m. to 4 p.m.

The mummy has not been on display since 2004 when she was carried out of the old museum as flood waters rose in the nearby Gregory Creek. Though the mummy was saved from the flood, the historic waterworks pump house that housed the museum did not fare well and was no longer useable.

The upcoming exhibit includes hands-on activities for all ages. Children will transform themselves into an Egyptian pharaoh and create an elaborate collar to wear in the afterlife.Learn to write in hieroglyphs, shop in the Egyptian Souk (market), and have your photograph taken with Kasra, our life-size dromedary camel.

CONCORD — The Listening Room, Davis Theatre’s version of an open mic night, will finish its first season Thursday, April 14. The fun will begin at 7:30 p.m. in the theatre located in the Cabarrus County Historic Courthouse at 65 Union St. S, Concord. All tickets are general admission and sold at the door for $5.

Since its inception in September, The Listening Room has featured musical performances, radio theatre, poetry and live painting. The evening is hosted by singer-songwriter David Domingo, who works with the Cabarrus Arts Council to help choose the acts. Domingo has played on the Davis Theatre stage several times in the past two years with his Fuzzbucket Music Company and also coordinates music for the Kaleidoscope Cultural Arts Festival in Kannapolis. One way The Listening Room differs from many open mic nights is that acts are chosen in advance and must be G-rated. In choosing performers, the arts council looks for both quality and variety. The guidelines for being considered as a performer may be found at www.CabarrusArtsCouncil.org.  For more information, email listenroom@yahoo.com or call the arts council at 704-920-2787.

Tick Tock We Need Some Clocks! Lee Street theatre’s next production is “The Last Five Years.” We are already planning the set, and we will need lots of wall clocks. If you have any sort of wall clock you would like to donate to Lee Street theatre, we would love to have them — round clocks, cuckoo clocks, pendulum clocks — we’d love to have a variety. Email td@leestreet.org or call 704-310-5507 if you have any questions, or to arrange a drop off time.

The Catawba College Wind Ensemble, under the direction of Dr. Steve Etters, an associate professor of music education and director of instrumental music at Catawba, will perform. Selections include Rick Kirby’s “An American Fanfare,” “America, The Beautiful,” “American Spectacular (A Musical History of the United States),” “American Folk Rhapsody No. 1,” John Phillip Sousa’s “Stars and Stripes Forever March,” and a sequence of familiar songs representing each branch of the United States Armed Forces. The Rowan County Veterans Honor Guard will be featured and two Catawba student conductors, Daniel Cline and Hunter Safrit, will be showcased.

After intermission, an exclusive screening of a music education documentary titled “Some Kind of Spark,” will be offered. The documentary follows six inner city kids (ages 8-12) from the New York area as they embark on a life-changing experience — the opportunity to study music at Juilliard Conservatory of Music. Made over a three-year period, the film follows the students and their dedicated teachers, capturing the budding and profound relationships building upon every lesson.

The concert and film are both free and open to the public and tickets are not required.

An emotional and intimate musical about two New Yorkers who fall in and out of love over five years. The show’s unconventional structure consists of Cathy, the woman, telling her story backwards while Jamie, the man, tells his story chronologically. Not familiar with this show? A movie version starring Anna Kendrick and Jeremy Jordan was made in 2014 and is currently available on Netflix. The show is a favorite among theatre nerds — including the Lee Street theatre staff. Don’t miss Managing Artistic Director Justin Dionne on stage as Jamie. Tickets are $20+tax and available at www.leestreet.org/tickets/ or 704-310-5507.

CHINA GROVE — Phosphoric acid, xanthan gum, sodium benzoate, potassium sorbate, calcium disodium edta…can you name all the ingredients in your salad dressing? Join us Monday, March 28 from 5:30-7 p.m. at South Rowan Regional Library for “DIY Vinaigrette,” the third workshop in our 2016 Learn.Act.Grow. series. chef Chris Herron and dietician Katrina Weavil will discuss the health benefits of DIY versus processed, store-bought dressings as well as demonstrate methods of blending, discuss the process of emulsification, and highlight foods that pair well with different dressings. Samples of vinaigrettes will be provided, as well as healthy snacks and water. Participants will be entered for a chance to win door prizes. There is no charge to participate, but registration is strongly advised. Visit www.rowanpubliclibrary.org or call 704-216-7841.

Into Germany — the GermanWestwall and the Battle for the Hurtgen Forest

Bill Cosgrove, WWII lecturer, will be exploring the life of young Tom Cash from his entry into combat at St. Lo, France, to his final battle in the bloody Hurtgen forest near Aachen, Germany.

Cash was a 19-year-old replacement combat infantryman. In two weeks, his 22nd Infantry Regiment suffered almost 500 killed in action and 1,600 wounded. Cosgrove will visit the location of Cash’s last battle among the foreboding fir trees and remaining fox holes in Hurtgen Forest. No prior knowledge of WWII is required for a full appreciation of the presentation, and you will leave with a renewed spirit of gratitude.

Cosgrove is a published author and also works with the Witness to War Foundation, inverviewing WWII veterans, preserving firsthand testimonies of the War. Call 336-753-6030 for details.

Kannapolis Jiggy with the Piggy Festival

Deadline March 18 for May 6-7 event in Downtown Kannapolis and NC Research Campus. For arts & craft and commercial vendors. Spaces limited. $50 fee for arts & crafts, $150 for commercial. Applications accepted only at www.jiggywiththepiggy.com

GREENSBORO — For the NC Arts Marketplace at the National Folk Festival held in  Greensboro Sept. 9-11. Deadline to apply is April 11.

In 2015, the 75th National Folk Festival attracted more than 102,000 attendees to downtown Greensboro for the free, three-day weekend.

Applications and guidelines are available at nationalfolkfestival.com/marketplace.

In keeping with the National Folk Festival’s overarching focus on the traditional arts, culture, and heritage of North Carolinians and all Americans, the Arts Marketplace will feature the juried, handmade creations of the finest artists and craftspeople from the North Carolina region.