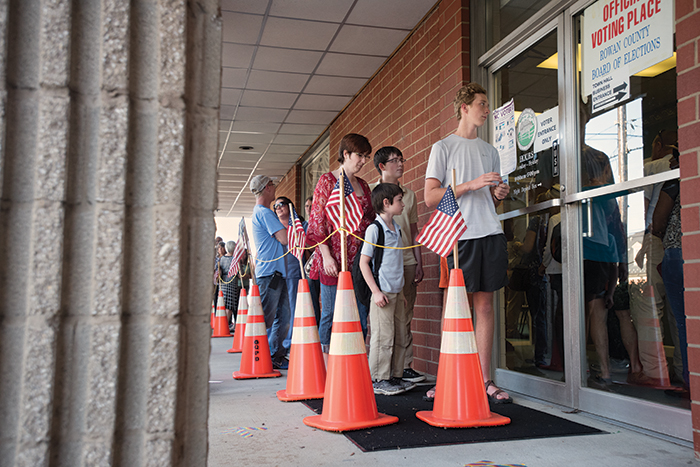 People wait in a long line to cast their primary votes at the Granite Quarry Municipal Building in Salisbury in March.

Rowan County voters turned out in historic numbers on Tuesday for the 2016 party primary elections.

Two precincts in western Rowan nearly ran out of ballots, lines stretched out of polling places for hours and unofficial numbers for the county show the 2016 party primaries as the highest turnout for a presidential year since 1984, when President Ronald Reagan was elected to a second term. Rowan turnout for party primaries in 2012 and 2008 come close — 2012 falls 0.83 percent shy and 2008 falls 2.14 percent short of 2016.

Rowan’s historic turnout comes even as voters for the first time were required to show photo identification to cast ballots.

When asked by the Salisbury Post, most voters in Rowan County said they liked or were indifferent about the photo ID requirement. Some said it adds confidence that election results are free of voter fraud.

Jennifer Ridgell, who voted in Granite Quarry, said photo ID “prevents people from voting that shouldn’t vote.” Ridgell added that enough resources are available for North Carolinians to obtain some sort of identification.

Voters are also able to obtain free photo IDs from the N.C. Department of Motor Vehicles.

Salisbury resident Frances Howe said that “everybody needs to show who they are.”

A minority of Rowan County voters who spoke to the Salisbury Post said the photo ID requirement puts an additional burden on low-income or elderly North Carolinians.

“It just seems like another hoop to jump through that isn’t necessary,” said Salisbury resident Lindsey Griffin.

She mentioned transportation as one barrier to obtaining photo identification. Transportation, however, is one of several potential obstacles for would-be voters, said Salisbury resident Danny Smith.

“I think it’s horrible,” Smith said about the photo ID requirement. “It puts undue pressure on people to produce ID. They might be people who may not be able to afford it; people who may not have transportation to get it; then, birth certificates are documents certain people may not have; passports could be another document someone may not have. In an age where we have the Internet, putting the pressure on people to go and produce identification that a secured Google search could find just seems unfair.”

Voters unable to obtain a photo ID can fill out a provisional ballot and reasonable impediment form. According to the N.C. Board of Elections, reasonable impediments include: lack of proper documents, family obligations, transportation problems, work schedule, illness or disability. Voters can also list “other” and describe the impediment.

Despite high turnout numbers, voters in Rowan County experienced a number of miscellaneous problems while voting. Some showed up at the wrong polling place. Alvin Poole, who lives near Rockwell, said he was nearly denied the ability to vote because of an error by a poll worker.

Poole said he hasn’t made any changes to his party affiliation or address in recent years. He provided a valid photo ID. Poole added that he voted in 2014 without any error. On Tuesday, however, poll workers told Poole he couldn’t vote.

He was later told by a Rowan County Board of Elections employee that poll workers made a computer error. A number of poll workers in Rowan were first-timers.

Poole was forced to leave his polling location after waiting 20 minutes. He returned later in the day after speaking to elections staff about the error.

“I’m afraid a majority of people would have just given up,” he said.