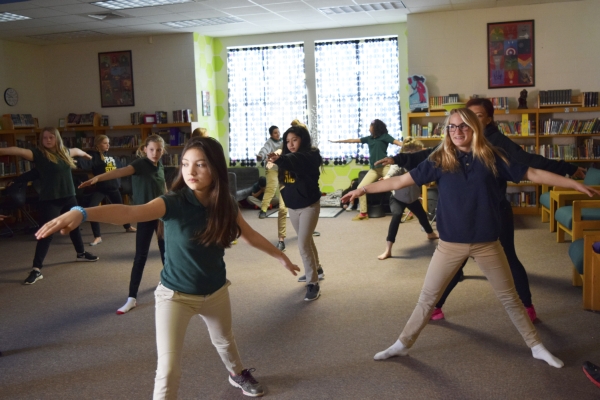 LANDIS — On Wednesday mornings, the halls of Corriher-Lipe Middle School are abuzz with activity. Just off of a stairwell, a group of students cluster around a black binder, practicing a play. The lights in the media center are off and a yoga class is underway, and in a classroom off the sixth grade hall, two students study baseball product design.

Corriher-Lipe’s “Power Hour” is all about ownership. The school has dedicated the first hour of every Wednesday to individualized, interactive learning. It’s time set aside to allow students and teachers to pursue their passions, and allows the school to mingle, connect and learn together.

“It opened up a lot of different things for the students,” Principal Tonya Brinegar-German said.

German said that at the beginning of the year, she asked teachers to think about a passion of theirs that they’d like to share with students. The result was Power Hour. Each semester, Corriher-Lipe offers nearly 40 separate classes.

“Every adult is sharing,” German said.

Power Hour offers every Corriher-Lipe student a chance to choose any class they’d like – from movie criticism to martial arts. There’s even a beekeeping class. For teachers and students, the power is in the choice.

Power Hour classes are split into semesters, and students are allowed to choose two per year. But classes change up, or have long-term projects, so students don’t need to change if they don’t want to.

Morgan’s class also showcases two of the most important aspects of Power Hour: individualization and connection. Within the broad category of sports statistics, students in Morgan’s class have the opportunity to choose an area of focus. One group may study product design, while another looks into gear.

“It allows the kids to research things that they’re passionate about,” he said.

But one of the most compelling facets of Power Hour is its ability to connect teachers and students across grade levels. Morgan is a sixth-grade teacher, but only three of the students in his class are sixth-graders. It helps build closer relationships between students and teachers.

“It’s a good way for teachers to connect with students on their interest level,” Morgan said.

It’s a powerful thing, German said, because it helps kids find an adult in the building who they can trust and are comfortable going to for help.

“That building relationship piece is critical,” she said.

For many students, that person may not be an administrator, a guidance counselor or a teacher they see every day – it may be a teacher they had in sixth or seventh grade, or one they haven’t had yet.

And sometimes, it may not even be a faculty member – Power Hour classes can be taught by community members, as well. At the moment, Corriher-Lipe offers one community class: a martial arts class taught by Jarrod Lanning, pastor of Trinity Lutheran Church in Landis. But German said she’s had other community members reach out to her about running classes.

So far, it’s been a hit with the students. Whether they’re journaling, building catapults or working on a mural, the reception is positive.

In the gym, Meredith Toppin is lifted to the top of a cheer pyramid. She and a dozen other girls practice stunts on mats laid out on the polished wood floor. On the other end of the gym, an exercise class does leg lifts. Toppin said she chose cheerleading because it’s something she enjoys. And she’s having a lot of fun with Power Hour.

“I think we should keep doing it,” she said.

And Wednesday mornings have some unexpected benefits. Since Power Hour kicked off, the school has seen strong attendance and low absence rates on Wednesdays.

“They don’t want to miss it,” German said.

It also ensures that every student can get the socialization and benefit normally provided by clubs – something that many kids miss out on due to transportation issues.

“Kids want to be involved in school,” German said.

German said students have asked if Power Hour can be a daily event, but for now, it only takes one day a week to make a difference.

“Kids are here on Wednesday,” she said.