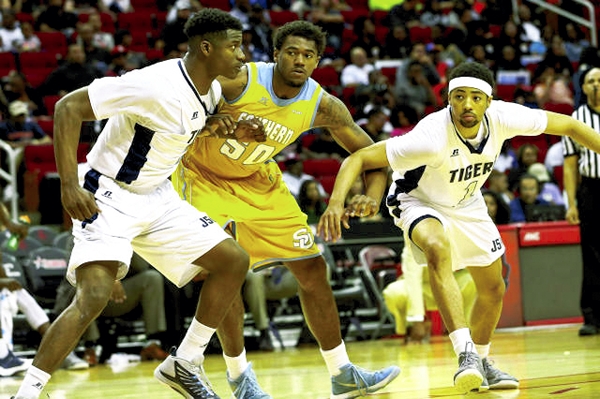 gojagsports.com... Southern’s Tony Nunn (50), center, battles for position against Jackson State last Saturday during the SWAC Tournament championship game in Houston. Nunn, of Salisbury, and his teammates will play Holy Cross tonight in Dayton in the NCAA Tournament.

It’s a long way from Hall’s Gym to the NCAA Men’s Basketball Tournament, but Salisbury’s Tony Nunn has made the trip.

Nunn hits the floor tonight in Dayton, Ohio, as Southern University battles Holy Cross in one of the “First Four” tournament games. Tonight’s winner boards a jet and heads to Spokane, Washington, to take on Oregon, a No. 1 seed, in Friday’s second round.

Nunn’s Southern team should be favored tonight in the 6:40 p.m. start in Dayton. Southern, 22-12, is coming off its SWAC Tournament championship in Houston last weekend. Holy Cross, 14-19, also won an automatic bid, champions of the Patriot League. The game will be broadcast live on Tru TV (TWC channel 75; Fibrant 126).

“We got here on Monday and had two practices today (Tuesday),” said Nunn by telephone last night. “It feels great to be here. We just won the SWAC and we’re ready to play.”

Nunn, a 6-9, 235-pound forward, momentarily forgot the day of the week, as the last few days have been a whirlwind. The Jaguars won three games in Houston, including Saturday’s 54-53 win over Jackson State for the SWAC title.

The team then flew back to Baton Rouge, La., where, on Sunday, the Jaguars watched the NCAA Tournament selection show as a team. The Jaguars were on their way to a selection show event, where their fans were waiting for them.

However, the bus suffered a flat tire near an Appleby’s and that became the watch party spot. Shortly thereafter, their fans showed up and pretty much took over the Appleby’s. “It all worked out,” laughed Nunn. “The fans made it and we all got to eat and find out where we were going.”

Dayton was the destination and Holy Cross was the opponent. By Monday afternoon, the team, cheerleaders and pep band were on a private charter jet bound for Ohio.

Nunn said Tuesday’s first practice was just 40 minues of shooting drills at the UD Arena in front of fans. The Jaguars then held a second, private practice at Wright University, putting in the game plan for Holy Cross.

Nunn’s parents, Anthony Nunn and Laura Chalk, live in Salisbury, as does his siblings — older brothers Jeff and Michael Chalk, and younger sister, Shaquilla Nunn, a sophomore at UNC Charlotte.

Tony grew up in Salisbury and played high school basketball at Salisbury for two years and at North Hills for one, all under coach Jason Causby. He then attended Oldsmar Christian School in Tampa, Fla., for his senior year.

The move to Florida led to some exposure for Nunn and he was recruited by Odessa (Tex.) Junior College. And even though much of his two seasons at Odessa were injury-plagued (stress fracture in his left shin), Southern coach Roman Banks saw enough in Nunn to offer a scholarship.

“Coach Banks saw me in a tournament in Dallas,” remembers Nunn. “I guess he saw something he liked in me.”

Nunn said that the shin is completely healed now and that “he feels great.”

Nunn is happy that he chose Southern when it was time to leave junior college. He was also recruited by Delaware State and Cal State-Bakersville.

“I’m real pleased with my decision,” said Nunn. “It got me a ring this year and a trip to the big dance. And we’ll go for another SWAC championship and ring next year, too.”

Nunn remembers that his very first experience playing basketball was at the Bobby Jackson Camp at Hall’s Gym, about 10 years ago. He was 12 or 13 years old then and now he’s a big, strong 22-year-old.

“Bobby was at some of the practices at the camp,” said Nunn. “He talked to us. I remember that he let us know that you can make it out of Salisbury and do some big things.”

“Coach Causby was the one of the main people who got me started on this journey,” said Nunn. “He taught me a lot, even things like fitness and eating healthier.”

Nunn said that at one point in high school, his weight was near 280 pounds. He started losing weight under Causby and really never has stopped, and is now at his leaner, 235-pound playing weight.

Nunn still considers Salisbury home and was able to come for three days during Christmas break.

Before he returns again, Nunn is hoping to see Spokane and possibly, points beyond.