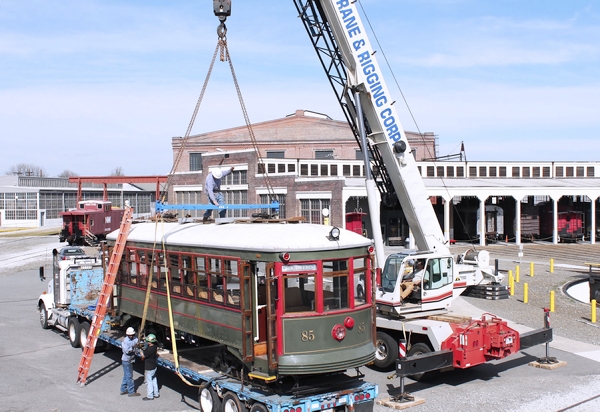 Submitted photo Trolley No. 85 from Charlotte is unloaded at the N.C. Transportation Museum in Spencer, where it will be restored and go on display.

The N.C. Transportation Museum is now home to a new artifact from the city of Charlotte, with the arrival of Trolley No. 85. The trolley is being leased to the museum by the Charlotte Historic Landmarks Commission and plans are in place to restore it to service around the 57-acre Spencer museum.

“Trolley No. 85 is a great addition to the museum’s exhibits, both for the history it represents and for the potential to give visitors another experience riding the rails aboard an authentic streetcar,” said N.C. Transportation Museum Executive Director Kelly Alexander.

Trolley No. 85 is the last to have run in the city of Charlotte in the heyday of trolley use. It was built in 1927, part of the Southern Public Utilities Company’s installation of a trolley system in the city. The trolley served Charlotteans for 11 years, but was replaced by what was considered a more modern form of transportation, city buses.

Dr. Lynn Weis, past chair of the Charlotte Historic Landmarks Commission, said, “The city thought it was an extraordinary thing, to have a modern convenience called a bus. And isn’t it interesting that now, today, we have trolley cars back in Charlotte and in cities all across the country.”

In March 1938, No. 85 made a final trip from Presbyterian Hospital to the city square for a ceremony, pulling the plug on the trolley system. The trolley then rolled to the South Boulevard car barn, ending the era of trolley service in Charlotte.

A strange history follows, with Trolley No. 85 being sold, resold, and taking on a variety of uses over the next few decades.

Trolley No. 85 was stripped of its seats and sold to the Air National Guard in 1938. It was used as an airport office. A year later, it was moved to Huntersville, where it remained through the 1940s, used as a diner and concession stand for an area, according to the research from the Landmarks commission, populated primarily by transients.

In 1951, the trolley was sold to Daisy Mae Trapp Moore, a Huntersville resident, who moved it into her backyard. The trolley was used as housing, first for Moore’s relatives, then later as a rental property. During this time, No. 85 was altered into a three bedroom residence, though it lacked plumbing and other modern conveniences. Even so, the car’s final resident lived there for 15 years.

When officials with the Charlotte Mecklenburg Historic Properties Commission located No. 85 in 1987, it had been condemned as housing and was weeks from being demolished. Instead, Moore sold the car to the historic preservation group for $1,000.

Over the next several years, the car was preserved, housed behind Charlotte’s Discovery Place, and renovated to its original operating appearance. After years of alterations, the car once again bore its original green paint scheme and the legend, “Southern Public Utilities Company.”

In 2005, the trolley was returned to limited service in Charlotte. In 2014, it was moved from the Charlotte Trolley Barn to make way for new trolleys, as the city continues to again embrace trolleys as a viable part of public transportation. A new home was sought and the N.C. Transportation Museum was a natural fit.

Watching the trolley hoisted by crane from a flat-bed trailer and placed on the railroad tracks at the Bob Julian Roundhouse at the N.C. Transportation Museum, Weis said, “We’re thrilled, because people are going to have a chance to see it, to get in it, and to even ride on it on occasion.”

N.C. Transportation Museum Foundation President Steve Mersch said the immediate plans are to prepare No. 85 for its debut during the May 14 celebration of National Train Day.

In the meantime, “We’ll analyze the condition of the trolley and the requirements for a generator that will allow it to move around our site,” said Mersch. “We look forward to seeing Trolley No. 85 full of visitors during our special events.”