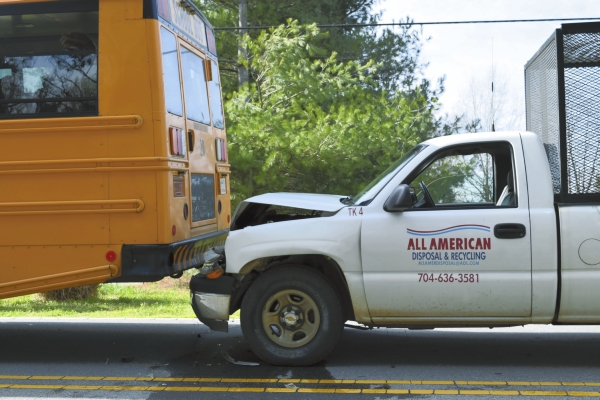 A truck and an East Rowan High bus were involved in a wreck Wednesday on St. Matthew's Church Road. Rebecca Rider/Salisbury Post

Witnesses are saying that a truck rear-ended a school bus Wednesday between stops on St. Matthew’s Church Road. Highway Patrol has yet to determine fault in the incident.

“Really they should just have one bus stop,” she said.

Crump was inside when the crash happened. Grace was outside.

“It was really loud,” Grace said.

Grace said she got off the bus and was walking towards the front porch, and when she looked back, the two had wrecked. There were 13 students on bus 20 at the time, but no injuries were reported. The driver of the truck declined to comment, but fire and EMS personnel said he was unharmed.

Tim Beck, transportation director for Rowan-Salisbury Schools, said when the bus pulled away from one stop and approached the next, the driver likely had the vehicle’s amber lights on, signaling another stop.

“And the truck behind her decided not to stop,” he alleged.

The crash blocked one lane of traffic on St. Matthew’s Church Road. As of 5:30 p.m. Highway Patrol was still on the scene.