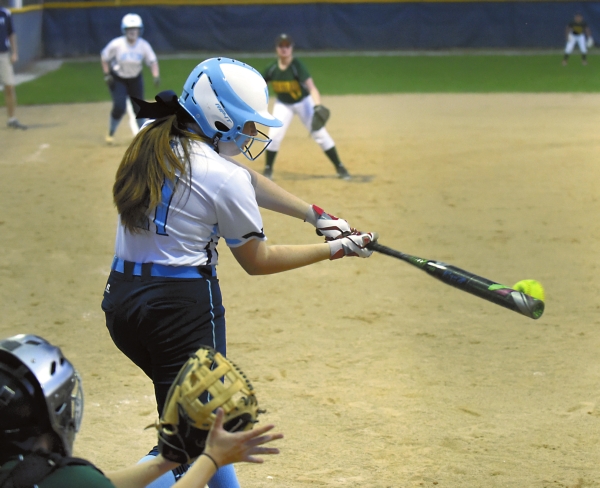 Wayne Hinshaw/for the Salisbury Post ... West Rowan‘s Timber Hedrick (21) puts the bat to the ball with teammate Morgan Corriher on third base during Tuesday evening’s softball game against Central Cabarrus in Mount Ulla. Hedrick grounded out on the play and Corriher was stranded on base. The Vikings won, 8-2.

MOUNT ULLA — A lot of softball is yet to be played in the South Piedmont Conference this season but for now, the Central Cabarrus Vikings are firmly on top of the mountain.

Freshman pitcher Riley Tucker stifled host West Rowan on five hits and one earned run Tuesday night, 8-2, to maintain a perfect start to the season for the Vikings (7-0, 5-0 SPC). The Falcons (4-2, 4-1 SPC) definitely did not help themselves with five costly errors that enabled Central two post a couple of big innings.

“Errors just killed us tonight,” Falcon coach Jimmy Greene said afterwards. “Our youth and inexperience definitely showed tonight. We were just timid and you can’t be timid, on defense especially.”

Seven of the eight runs recorded by Central Cabarrus were unearned but Coach Charlie Blackwelder did not care. “We will take the run, earned or unearned,” Blackwelder said. “But we also hit the ball very well in certain spots. We are extremely excited to be undefeated at this point in the season.”

Blackwelder said he told his team before the game that West Rowan won the last two SPC titles and that was something he wanted for his own team. “They are always very tough, especially here,” he said. “But we were up to the challenge tonight.”

The Vikings notched hits in each of the first six innings against West’s hard throwing senior Peyton Greene, but did not break through until the third with three unearned runs on three Falcon miscues. Two throwing errors and a single by Tucker brought in the first run, then it was 2-0 on a groundout by Jordan Baker. A misplay at third base then raised the score to 3-0.

West managed to get one run back in the fourth inning with one out when Alex Linder singled and Morgan Corriher boomed a double to right. But defensive woes surfaced again in the top of the fifth that essentially put the game on ice. With two outs, a high pop fly on the infield was dropped by Linder. A walk and a hit batter followed to load the bases then Miranda Benton dropped a single into right field to score two runs. The Vikings then made it 7-1 on a high throw to first by Greene.

Tucker put the capper on a great game in the top of the sixth when she boomed a solo home run to right to make the score 8-1. The shot completed a 2-for-4 night for Tucker with two RBI. “It was a low, inside pitch,” Tucker recalled. “and that is my favorite pitch to hit, so I just hit it.”

“She is a really good talent and we are so proud to have her,” Blackwelder said of his young star. “Riley is very humble and her emotions never change, whether we are ahead or behind.”

West added their final run in the bottom of the seventh on singles by Mary Sobataka and Parker Greene and a throwing error at second base on a relay. But second baseman Kasey Rowden ended the game with a twin killing by snagging a hard line drive and throwing back to first to double off the runner.

Both teams jump right back into action today with West traveling to Mount Pleasant for a non-conference  game and the Vikings hosting a strong Mooresville team.