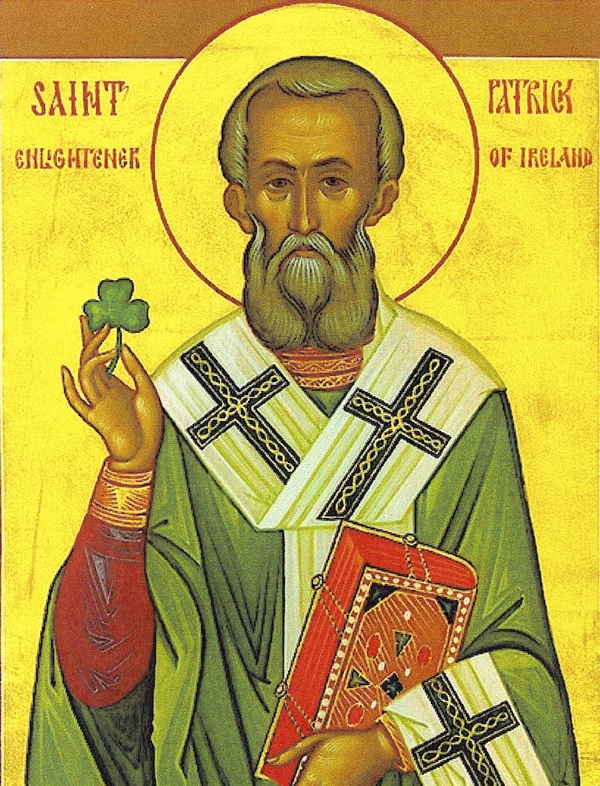 St. Patrick was known to use the three-leaved shamrock to teach about the trinity. Modern celebrations have changed the focus of St. Patrick's Day to a party time.

And March 17 is St. Patrick’s Day, a time to honor the saint who brought Christianity to the Celts.

Yes, the Irish believe in leprechauns, but not associated with St. Patrick.

And our so-called traditional meal of corned beef and cabbage is very much American. American Irish, we can say. Immigrants landing in New York found corned beef when they arrived, and they used it to replace ham in some of their traditional dishes.

So what would an Irishman have on St. Patrick’s Day? Likely a stew of lamb or beef, perhaps some roast beef or even salmon, especially if it’s on a Friday in Lent.

The stews are quite simple, with chunks of lamb boiled in water for about an hour. Then carrots, celery, cubed potatoes, onion, bay leaf and parsley are added for another 30 minutes. Some recipes add sliced potatoes, too, those go in near the end, for 30 minutes more simmering.

With your stew, you will want a nice loaf of Irish Soda Bread, which is very much like a large biscuit.

The simplest recipe I’ve seen is this, from a decades-old Fannie Farmer Baking Book:

Grease an 8-inch cast iron skillet. Mix the dry ingredients in a large bowl and add the buttermilk, stirring quickly with a fork until it comes together in a rough mass. Knead on a generously floured surface for just 30 seconds. Pat it into an 8-inch round, about 1 1/2 inches thick and slash a large quarter-inch deep cross across the top. Put it in the skillet and bake at 375 degrees for 45-50 minutes, It should be slightly brown and the cross should have spread open. Transfer to a rack to cool, then wrap with a slightly damp tea towel and let it set for 8 hours. This step makes it easier to slice. Serve with Irish butter or unsalted butter with a meal.

You must have some Guinness with your meal, but nothing green.

After the meal, settle yourself down with a wee dram of Irish whiskey, such as Jameson, either neat or on the rocks.

Or try what’s known simply as:

Mix all ingredients and stir over ice. Strain into a chilled sherry glass.

For a fancy garnish, flame a piece of orange peel and squeeze it over the cocktail, then garnish with an olive. Say Slainte! which translates roughly to Health!

If it’s dessert you’re looking for, well a bread pudding is a nice Irish dessert, or a sherry trifle or toffee pudding. Both the trifle and toffee pudding are associated with Christmas, especially. I had an Irish friend who made a delicious trifle, requiring numerous steps. We always laughed a lot when we ate it.

The bread pudding was a way to use up old bread. this recipe, from Celtic Times, is very rich.

One of my favorite memories is of my grandmother’s bread pudding. Her parents came to the United States because of the potato famine. Her father was a New York City policeman, on a horse. He made beer in his bathtub and took in retired police horses which would otherise have gone to the glue factory.

My grandfather loved lamb and stew and her bread pudding.

She made an old-fashioned whiskey sauce with lots and lots of butter, sugar and Jameson’s to put on top of the bread pudding.

She never wrote down any recipe, but this one sounds a lot like what she did.

6 ounces sugar, plus 1 Tbsp. for sprinkling

Butter an 8-inch square dish. Butter the bread and arrange four slices, buttered side down, in one layer in the pan.

Whisk the cream, milk, eggs, vanilla extract and all but the tablespoon of sugar together and pour through a fine sieve over the bread. Sprinkle the remaining tablespoon of sugar over all and let sit, loosely covered, for a least one hour, or chill overnight.

Preheat oven to 350 degrees and place pudding in a larger pan filled with enough water to come halfway up the sides of the pudding pan. Bake in the middle of the oven for about 1 hour and serve warm with softly whipped cream.