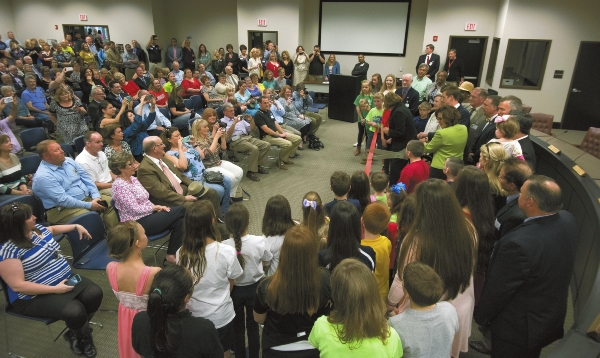 A large crowd gathered for a ceremonial ribbon cutting Monday at the new Wallace Educational Forum on North Main Street in Salisbury. Following the ceremony, the school system provided a full tour of the modern, three-story office building that will serve as the central office for the Rowan-Salisbury School System administration. Jon C. Lakey/Salisbury Post

SALISBURY — With a snap of scissors on red tape, the Wallace Educational Forum is officially open.

Monday’s ribbon cutting finally put an end to the 20-year discussion and debate that surrounded the new central office for the Rowan-Salisbury School System.

“Somebody said, ‘Well, this is a real happy day,’ I said, ‘Well, it takes a long time to get happy,’” former board member Kay Wright-Norman said.

Wright-Norman served on the board from 1994 to 2014, and well remembers the fight to get funding and find a location for a centralized office. But after more than a decade of fighting, the Wallace Educational Forum is finished. The system moved into the office on March 4. After the ribbon cutting, guests were invited to mingle and tour the new facility.

Former Superintendent Dr. Judy Grissom, who began fighting for a centralized office in 2010, was not present, but several former board members attended Monday evening’s event.

L.A. Overcash said the building was “worth every minute” of the debate surrounding it.

“This is the best outcome of what has been a very contentious issue,” Bryce Beard said.

Beard said it was ironic that after all the infighting and struggle over a location, the Wallace Educational Forum now occupies a prominent spot in Salisbury’s skyline. He said he hopes it reflects the value and prominence the community ascribes to education.

“It’s a community symbol,” he said.

The current property, in the 500 block of North Main Street, was granted to the system by Lee and Mona Wallace in a property swap. Mona said she and Lee are “ecstatic” that the offices are in downtown Salisbury, and credits Lee with the property grant.

“I think he personally deserves a lot of credit,” she said.

The office was also built with funding from Rowan County commissioners, in-kind services from the City of Salisbury and donations from the Robertson Family Foundation, the Stanback family and Richard Monroe.

School system officials said the new, centralized building would promote employee efficiency and cut out the confusion that came from system operations being split between five offices.

System officials also put together a time capsule of the history of the building, to be opened February 2066.

In front of a brand new, packed boardroom, Superintendent Dr. Lynn Moody spoke about how the building signifies the “critical importance” that education takes in the Rowan-Salisbury community, as well as her hope for the future of the system.

“To whom much is given, much is expected,” she said.