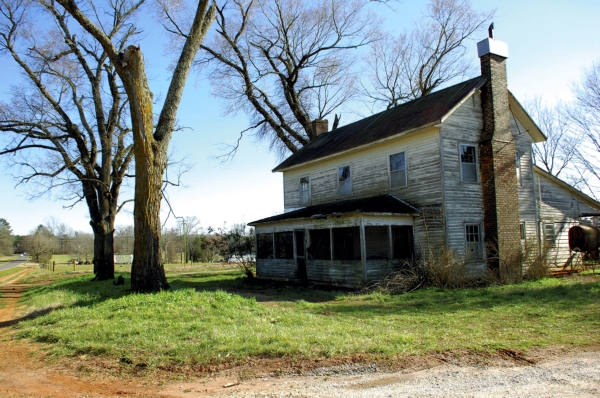 Mark Wineka/Salisbury Post The late Paul and Nell White once lived in this Goodnight Road farmhouse surrounded by tall elms.

The Dart: A farmhouse with one good coat of paint, memories Mark Wineka/Salisbury Post Mary Ann Barger stands in the side yard to the farmhouse where she was raised.

SALISBURY — Mary Ann Barger must have been crazy, but back in 1984, when her daughter, Brandi, was only 3 years old, Mary Ann told her father she would paint his old two-story farmhouse on Goodnight Road.

Paul White didn’t hesitate. He took off for the Lowe’s store in Salisbury and returned with all the white exterior paint Mary Ann would need. He even fashioned a lift, using his farm tractor, so his daughter could reach the eaves.

Mary Ann started painting, using a brush and slapping that paint onto the clapboards of Paul and Nell White’s house, where Mary Ann and her two siblings had been raised. One brush. One woman. One big house.

“I think it took a week,” Mary Ann said.

It was the only coat of paint the farmhouse, long empty and tired now, ever received. On a sunny Sunday afternoon, the house still has a majesty about it, though the half dozen elms around it, as tall or taller than the house, have been fading with the years, just like the structure.

Mary Ann and her husband, L.P., built their own home across the pasture from the farmhouse in 1975, and Mary Ann routinely brought her children up to the farmhouse to see their grandparents.

It was a great afternoon when you could sit on the screened-in porch, snap beans and talk about nothing and everything at the same time. And Nell White always expected the family to be at the farmhouse for Sunday lunch after church.

Everyone in the family went to Salem Lutheran and, in fact, Mary Ann was running late for a prayer service that evening.

Mary Ann doesn’t know the exact age of the farmhouse, though she thinks it has to be at least a century old. Her daddy added the screen porch in front and another section in back, but the house originally belonged to the Goodnight family, for which the road is named.

A Goodnight descendant, Cora Goodnight Yost, once made copies of an old picture of the house and gave it to Mary Ann, who proudly displays it on an easel at her own home.

Today, the farmhouse appears as though it’s resting right on the ground, and though it doesn’t have a traditional fieldstone foundation, Mary Ann says it actually sits on rocks, which you can no longer see.

Only about half of the front door to the screened-in porch remains and a few stones to the original stoop. Some of the floorboards inside have been torn out, showing how close to the ground the house really is.

Paul White remodeled the interior through the years, and he installed knotty-pine paneling in some of the rooms. The farmhouse isn’t beyond repair by any means. The chimneys look to be in good shape, and the roof has held up fairly well.

“The upstairs is as sound as it can be,” Mary Ann said, though she tempered that observation. “… We just let it go to pot, and it’s such a shame.”

Paul and Nell White’s farm took in 180 acres and stretched all the way to N.C. 150 to the south. Using her hands, Mary Ann motions how far it stretched in other directions along Goodnight Road.

When Mary Ann was a kid here, the Whites had a dairy farm and raised cotton.

“We had an excellent childhood,” Mary Ann said. “We didn’t have a lot of money, but we had Mom and Dad.”

Mary Ann said she was expected to work down at the dairy barn before leaving for school. She attended elementary school at Patterson, now home to the Price of Freedom Museum, and one of her classmates and neighbors was former Food Lion President Tom Smith.

This land and this corner of Rowan County becomes special when you’ve lived here all your life. Before Paul and Nell White bought this farm, Paul’s family had lived on a rented farm just down the road.

Mary Ann and L.P. also raised their own children on Goodnight Road, which is busier than you might think. Their son, Braxton, is still farming, raising pigs while L.P. still has some beef cattle.

Mary Ann said Braxton “is very interested” in the old farmhouse. To the passerby, it looks as though it has a realty sign out front, but that’s just a sign saying Braxton has pigs for sale.

Mary Ann’s long-ago coat of paint has faded away but not her love for this house on Goodnight Road.

Yesterday: In 1989, a monumental fire at Salisbury Marble and Granite Co.

This photo from the Post files shows the Jan. 18, 1989, fire that destroyed the manufacturing facility, costly memorials, offices... read more