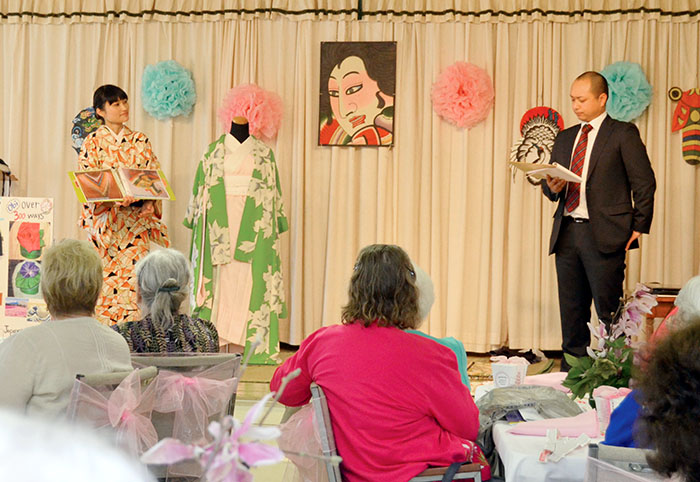 Yoshiko Kikuchi demonstrates how to put on a kimono at the Spencer Doll and Toy Museum's Doll Day exhibit. Her husband, Rio Kikuchi, right, translated for her as she gave the history of the kimono and explained the time and precision it took to put on the Japanese garment. Shavonne Walker/Salisbury Post

SPENCER — Noriko Gordon’s curiosity became more than she could bear after reading a 1997 article in a Japanese newspaper about the return of a doll from the United States to Japan.

The doll was a part of a Depression era exchange program — the 1927 Doll Exchange — designed to foster goodwill relations between the two countries. Gordon, a Connecticut resident set out to find a Japanese doll — Miss Chosen — that was sent to Connecticut by Japanese citizens. After many phone calls, connections with university professors in Connecticut, Gordon was instrumental in locating the small doll in a museum storeroom.

Gordon and her husband, Bill, traveled from Connecticut to attend the Spencer Doll & Toy Museum’s Doll Day luncheon. The Saturday luncheon featured the history of the 1927 Friendship Doll Exchange. Bill has a website devoted to the history and story of the doll exchange.

The 1927 Friendship Doll Exchange was an idea by an American missionary, Sidney Gulick, who was living in Japan with his family at a time when the Immigration Act of 1924 prohibited East Asians from immigrating to the United States, increasing tension between the U.S. and Japan.


Gulick understood the importance of dolls to the Japanese culture and he was under the belief that the dolls would ease cultural tensions between the two countries. So, spearheaded by Gulick, the United States sent 12,739 dolls to Japan. Inspired by the gift, Japanese Viscount Eiichi Shibusawa initiated a program to send 58 dolls to American museums and libraries.

The Japanese dolls stood less than 3 feet tall and were made by the best Japanese doll makers. The dolls were dressed in silk kimonos and came with their own unique accessories. The dolls names represented different cities or regions in Japan.

North Carolina was a recipient of a doll named Miss Kagawa, which is now housed at the N.C. State Museum of Natural Sciences in Raleigh, the only state museum in North Carolina at the time. Although Miss Kagawa was not on display at the luncheon, a replica and picture were prominently displayed.

The luncheon included a Hina Doll exhibit from the N.C. Museum of History, a kimono demonstration from Yoshiko Kikuchi and her husband, Rio Kikuchi from the Japanese Association of Charlotte. The Rev. Fleming Otey also had a number of Japanese dolls and other items on display, including a book written by his daughter, Mimi Otey Little. The book, “Yoshiko and the Foreigner,” detail how Otey met his wife, Yoshiko, while he was a soldier in Japan.

Also in attendance was Darlene Guerry, founder of the North Carolina Friendship Doll Exchange Association, who discussed the history of Miss Kagawa, North Carolina’s Japanese Friendship Doll. Many of the Japanese dolls were destroyed during World War II, but 44 of the 58 have been found. Guerry accompanied Miss Kagawa on her trip back to Japan for restoration.

Karen Nichols, a member of the Rowan Doll Society, said she has a few Asian dolls in her doll collection and wanted to learn more about it. She also wanted to hear more about the doll exchange project.

Laurie Donald and friend Ramona Brand traveled from Richmond, Va., with the Dorothy Glen Doll Club for the event.

“I heard about it through the club,” Donald said.

She said other club members had attended an event with the Spencer Doll and Toy Museum and she knew she wanted to attend.