Carl White: A grand living room, a bit of mystery and fine horses 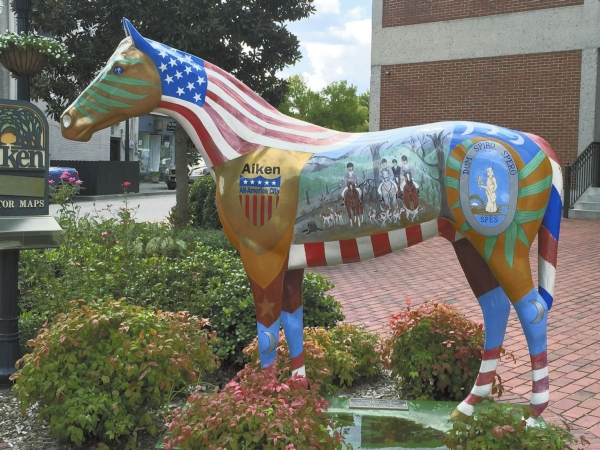 So there I was, checking into the Willcox Hotel in Aiken, S.C. Having read some history about this grand location, I was a bit concerned. I realized that the shoes I was wearing may not be good enough.

You see, it had been reported that back in the day, the bellman would sometimes shake his head no as he escorted a would-be guest to the registration desk. Owner Frederick Willcox knew this was his signal to tell the caller there was no room at the inn.

One day Willcox asked the bellman, “How the devil do you know whether I should register a guest or not?” To which the employee replied, “His shoes, Mr. Willcox. If they don’t wear shoes by Peel or Maxwell of London, we don’t want ’em.”

I do not now nor have I ever owned a pair of either. However, I do know that Maxwell has been making shoes for 250 years and they have a fine reputation for quality. If you have a pair you would certainly want to take good care of them. I wear good shoes, but they are not from London.

When I reached the registration desk, I looked around to see if anyone was nodding to the clerk. It seemed as if I were in the clear as I was greeted with a happy smile and a hardy, “Welcome, Mr. White!”

I was checked in, and upon my request I was given a brief tour and history overview of the Willcox. The thing I liked most about the grand lobby was the fact that it is referred to by many as the living room of Aiken. I can certainly understand this sentiment. White cushioned rockers and six large white columns line the front porch, inviting guests into the stately lobby. Attractive seating areas feature beautiful wooden tables and comfortable chairs. These are designed for engaging conversations, and that certainly appealed to me.

I can only imagine the conversations over the years with visitors from the north who were frequent guests dating back to the late 19th century when the Willcox was built. There were many notable guests; among them were Harold Vanderbilt, Winston Churchill and Franklin D. Roosevelt, who was said to have quietly arrived by his private train car to the back door. Why did President Roosevelt visit Aiken? From what I gathered, it was likely a personal and not an official visit.

I could not have asked for a more comfortable room. In the evening as I sat reading about the history of the hotel and the area, I came to realize that Aiken has much notable history. I understand why the Willcox was and is a favorite of many.

I love horses, and Aiken is known around the world for its fine equestrian activities. The Aiken Steeplechase Association was formed in 1930 and has worked tirelessly to ensure that horses will always reign supreme in Aiken’s history and in her future. I was very pleased to have had the opportunity to spend a day meeting some fine horses and their handlers as well as visiting the Aiken Thoroughbred Racing Hall of Fame and Museum. As you might imagine, the museum focuses on the fine horses and riders who have made history in Aiken.

I took meals with some great local story tellers whose families have been in the Aikin area for many generations. With many stories yet to tell I will return to learn more, because some things just require more time.

Carl White is the executive producer and host of the award winning syndicated TV show “Carl White’s Life In the Carolinas.” The weekly show is now in its seventh year of syndication and can be seen in the Charlotte viewing market on WJZY Fox 46 Sunday mornings at 10 a.m. For more on the show visit www.lifeinthecarolinas.com. Email: Carl@lifeinthecarolinas.com.

The Dart: A farmhouse with one good coat of…