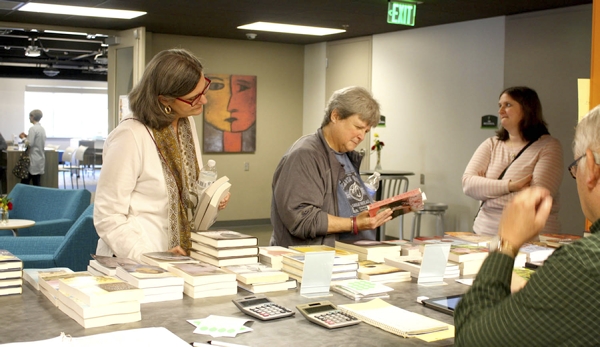 Deirdre Parker Smith/Salisbury Post Patrons of the 2016 Rowan Reading Rendezvous shop for books by the authors at the event. In the background is the room where authors set up to sign their books.

Those who came to the 2016 Rowan Reading Rendezvous were treated to a day of talented and interesting authors.

Held this year in St. John’s Lutheran Church, the RRR attracted faithful readers, many of whom have attended the events in the past. The spacious and comfortable facilities helped make the day a success.

The authors, this year assigned to different panels, also had a room where they could sign books, with proceeds from the sales going to the Friends of Rowan Public Library.

The day started with Kristy Woodson Harvey, daughter of former Salisbury mayor Paul Woodson and wife Beth. Harvey is preparing for the April publication of her second book, “Lies and Other Acts of Love.” She was joined by Faith native Susan Boyer, author of the Liz Talbot mystery series set in the Lowcountry.

They talked about how they became writers and how important a sense of place is. Harvey said the library is the one place where a child can make his or her own choices, instead of being told what to do. Boyer describer herself as a library rat.

Reading, they said, brought them to new worlds and taught them that anything is possible. Boyer said stories are how we learn about the world. “A story is how we pass on information.”

Harvey said she didn’t know you could be a writer until she was a senior in high school, when she had an internship at the Salisbury Post. But Boyer and Harvey took detours before they began writing. Boyer was a computer programmer; Harvey sold insurance. Their experiences, they said, helped them when they finally got to write.

The next panel included Harvey, Rising Stars of Southern Women’s Fiction. Kim Boykin, Erika Marks and Kim Wright were the other writers. They agreed that living in the South was lucky because there are so many stories to tell. Boykin mentioned that the real crazy characters are ones Southerners parade out to the front porch instead of trying to hide.

Wright said she’s “so lucky to be in the South because there is a sense of kinship here” that is unlike anywhere else in the country. Marks, who was born in Maine but has lived in the South for 10 years, said the South is a place in her stories.

In discussing the use of Southern dialect, Harvey said didn’t use what she heard in her head, because she wanted a New York publisher to buy her book. Then the editor asked her to add it. Marks said she has used some dialect, which drives the copy editors crazy. “Did you know you dropped all the Gs in here?”

Wright described Southern women’s fiction as “to, for and about women.”

C. Michael Curtis, the fiction editor at Atlantic magazine — formerly The Atlantic — had his own panel about choosing fiction. He offered tips for what not to do when submitting a short story for publication. Misspellings and poor punctuation are sure to sink a story, he said.

Deadly dull dialogue is a turnoff, too. “Would you like cream in your coffee?” “Yes, I’d like cream in my coffee.” Curtis made an indistinguishable noise at that.

The authors discussed how photographer Rob McDonald inspired their pieces by focusing on certain elements of their homes. Humphreys said, “I told him not to take a picture of that area or this, and he said, ‘But that’s what I want to see.’ “

Four male writers made up the New Fiction and Debut Novelists Roundtable. One of the writers, Ross Howell Jr., is 65, with his first novel, “Foresaken,” a fictional account of a true story about a 16-year-old African-American girl who was executed for murder in 1912 Virginia.

The others, Travis Mulhauser, James McTeer II and Greg Shemkovitz, had some things in common. Howell and Mulhauser came from other careers. Mulhauser knew he wanted to write, but had a family he must support. Howell worked in publishing, but had never tried to write a novel.

Mulhauser and Shemkovitz wrote about places they came from before they moved south — Petosky, Mich., and Buffalo, N.Y. Shemkovitz had nothing nice to say about Buffalo.

McTeer, a Southern original, loves the smell of pluff mud, a Lowcountry mud full of dead things, creating a smell that is unmistakable. In his book, he embraces pluff mud, and his unusual family history — his great grandfather was high sheriff and a witch doctor.

Perhaps the most moving presentation came from Dick Wall, who is promoting his late wife’s book, “Mister Owita’s Guide to Gardening.” He was married to Carol Wall for 42 years when she lost her final battle with cancer.

The book is neither about gardening, nor about dying, but about living. Both Owita and Carol die, but they teach each other so much about life.

Wall is dedicated to sharing their story and to talking about healing vs. curing. Healing can happen in so many ways that have nothing to do with medicine, he said.

J.E. Thompson was the final speaker. Although he’s written four thrillers, he is now writing books for middle grades. His 12-year-old daughter (at the time) prompted him to write something she would like. He took the challenge and created a book that’s a mystery, a lesson in acceptance of others and a history lesson.

He thinks the books are appropriate for all ages. “Just because Scout told the story in ‘To Kill a Mockingbird’ does not make it a children’s story. It’s a story for everyone.”

He spent years on Wall Street, then decided to stop postponing his desires, quit his job and began writing. He learned what was good and what was garbage by paying attention to good writers.

Look for stories about the individual panels on the Books page in the coming weeks.