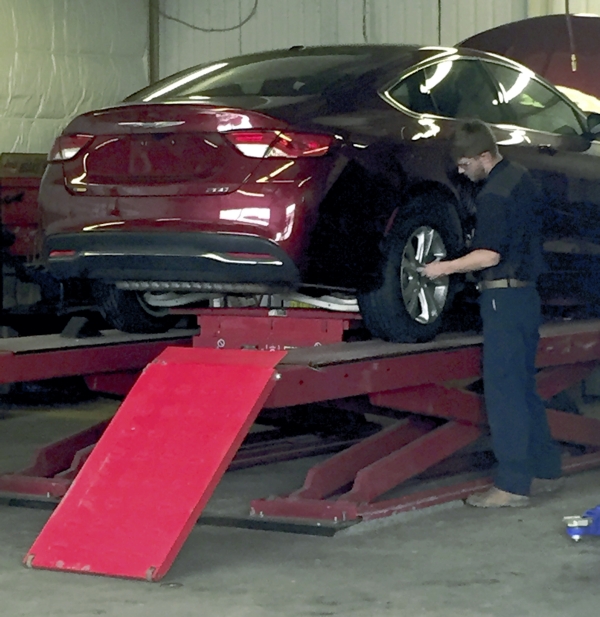 Amanda Raymond/Salisbury Post Greg Moore puts tires on a car at Rock Steady Rides. The family-friendly automotive shop will be holding its grand opening on March 25 from 10 a.m. to 3 p.m. at 1823 S. Main St.

“If I ain’t going to drive it on the road … I wouldn’t want anyone else to either,” he said.

With the help of his family, he opened a family-friendly automotive shop.

The shop offers repair and maintenance, aftermarket modifications and will soon have a pre-owned inventory.

Redmond said there will be food and drinks at the grand opening. The shop, as well as AutoZone, will be raffling off prizes for things like oil changes and car wash kits.

There will also be Jeeps, rock crawlers and pro-modified drag cars on display.

Redmond has spent a long time in the car industry. He has built and fixed cars both for big-name companies and on his own time.

“I’ve been playing with cars forever,” he said.

Redmond’s interests have moved from muscle cars to imports to Jeeps and rock crawlers.

Because of his wide interests, Redmond said he is able to do pretty much any kind of customization. He is an ASE certified technician and has been a professional mechanic for about eight years.

Through his experiences working on cars and servicing customers at front counters, Redmond has learned to be straight with customers.

“I’ll tell you everything that’s wrong and then I’ll prioritize it and tell you why,” he said.

Redmond said he realizes money is tight for some people, so he lets people know what they should get fixed right away and what they could wait a while to get fixed.

He also advises customers to fix little problems so that they do not cause bigger, more expensive problems in the end.

“I want to make sure you know and give you the best information,” he said.

When it comes to cars, Redmond said if he wouldn’t let his wife or mother drive it, he’s not going to let one of his customers drive it either.

“I try to treat everybody like family, or as close as possible,” he said.

He takes the time to explain issues to customers, and will even point customers to his competition if he can’t help them himself.

The shop was designed with families in mind. The spacious waiting room area has a television, coffee and a coloring table for children. There is also a baby-changing station in the bathroom.

And the shop is family-owned. Redmond’s mother-in-law Janet Edwards does the books and other financial things, his brother Thomas, a Hyundai-certified technician, works on cars in the shop and his brother-in-law manages the shop’s IT issues.

Redmond said he hopes to be able to perform vehicle inspections in the near future to make it a true one-stop-shop for customers.

He said he did not start the business to get rich. He is there because he loves cars and wants to help people get the most out of them.

Dollar General on US Hwy 601 in final stages