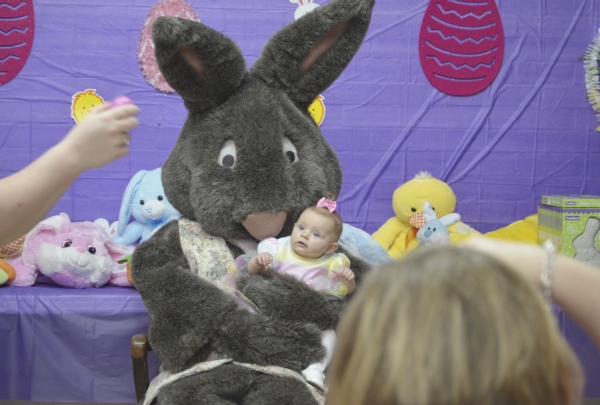 Five-month-old Isabella poses with the Easter Bunny during an Easter Egg hunt held at the Kennedy-Hall American Legion in Cleveland. Her mother, Heather Reamy, not shown, tries to get the infant's attention. Over 100 people attended the annual event. Shavonne Walker/Salisbury Post

In less than two weeks, the Easter Bunny will likely visit the area with lots of candy and hugs. A group of children got an early visit Saturday when they attended an Easter egg hunt at the Kennedy-Hall American Legion Post 106.

Over 100 people attended the event, which was open to the community, and has been going on for the last 17 years.

“Every year it gets bigger and bigger,” said Joanie Hicks, president of Kennedy-Hall and District 9.

She said they wanted to get a “jump” on the flood of upcoming Easter egg hunts that will surely take place in the coming weeks.

Organizers placed money and candy in all of the eggs, but there were several golden, orange and yellow eggs that, once redeemed, gave the child a special prize. The prizes included large chocolate bunnies and stuffed animals.

The children and parents were also able to have cupcakes and other refreshments. Each child also had their picture taken with the Easter bunny and was able to take home their printed picture.

Volunteers hid over 300 eggs throughout the grounds of the legion with each age group separated into a specific search area.

Hicks said she wanted to be able to show the children some patriotic aspects and asked them to follow her in reciting the Pledge of Allegiance and the popular patriotic song “My Country, ‘Tis of Thee.”

Colleen Kopetsky brought her two boys, Colsen, 5, and Kylan, 4, to the event. Kopetsky said she remembers attending similar events as a child with her father, Thomas “Ski” Kopetsky, who was Post commander.

The event wasn’t just for the older children, but there were a few infants who were celebrating their first Easter egg hunt with parents and grandparents.

Nine-month-old Kinley McKee was one of those infants. The young girl had a cloth Easter Bunny basket and posed for plenty of pictures for grandma.

Dad, Lucas, said Kinley even downed half a cupcake.

It was a family affair for Heather Reamy and her family, which included her children, mother, sister and her sister’s children.

“There’s nothing like watching children with smiles on their faces,” said grandmother Shirley Reamy.