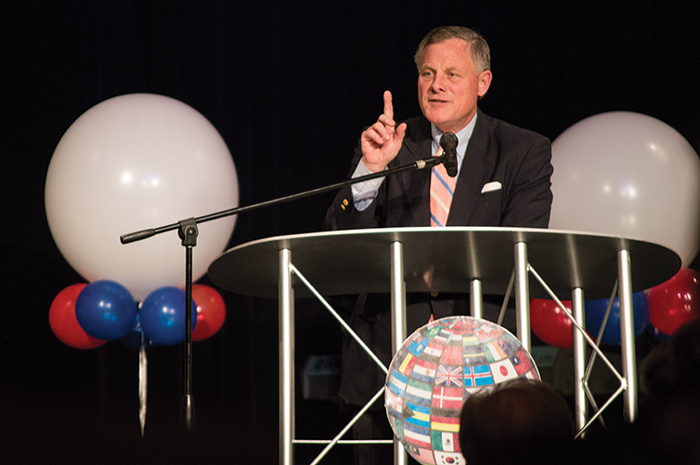 If you have U.S. Sen. Richard Burr’s drivers license, he may not need it anymore.

In a Saturday speech to Rowan Republicans, Burr told a brief story of losing his driver’s license when going to vote recently. He speculated the driver’s license might be in the Ronald Reagan Washington National Airport, located in Arlington, Virginia.

“I said ‘my passports are in Washington and I don’t have a military ID, but I’ve got this little ID,'” Burr said, recalling his voting experience. “Clearly, I’ve lost my driver’s license, it’s probably sitting in the Reagan Airport. I probably lost it last night. I said ‘can I fill some type of provisional ballot out until I figure out what’s going on?'”

The News and Observer of Raleigh reported that Burr, a U.S. Senator since 2005, filled out a reasonable impediment form and Burr has also obtained a new driver’s license. According to the N.C. Board of Elections, reasonable impediments include: lack of proper documents, family obligations, transportation problems, work schedule, illness or disability. Voters can also list “other” and describe the impediment.

“It was me and they made me prove it was me,” Burr said. “That’s a good thing. Now, let’s make sure it’s not in vain. Help me get elected next Tuesday.”

Burr’s anecdote came at the end of a 20-minute speech during the Rowan County Republican Party’s Lincoln-Reagan Dinner at The Events Center on Webb Road. More than 200 people attended, according to Rowan Republican Chairman Stephen Kidd.

During his speech, Burr mostly spoke about the 2016 presidential race. He focused on the importance of uniting behind the eventual Republican nominee. Briefly, he also criticized the age of U.S. Sen. Bernie Sanders, who is running for the Democratic nomination.

“Our candidate may not win, but we will get behind whoever our nominee is and work for them to get elected November 8th,” Burr said. “On our side, we’re down to four. And, I will tell you that any one of them I can look at and call them Mr. President.”

He never mentioned specific Republican candidates. However, Burr said the 2016 presidential race is the weirdest he’s ever seen.

“There’s nothing I can do that will change the landscape for a majority of us, but what we can do is we can change what the opportunities are for our children and grandchildren,” he said.

When discussing the presidential race, Burr only mentioned one candidate by name — U.S. Sen. Bernie Sanders, who is running for the Democratic nomination. Burr briefly joked about Sanders being referred to as a “fresh face” — something Burr said he’s heard on TV.

“Let me just share with you that Bernie and I for the last five years have been on the same workout schedule, which means we cross as we finish showering,” Burr said. “I don’t ask you to visualize this, but he is not a fresh face.”

Burr was one of two scheduled speakers during the Lincoln-Reagan Dinner. The other was Lt. Gov. Dan Forest. Gov. Pat McCrory was scheduled to speak, but wasn’t able to attend because of illness, Kidd said.