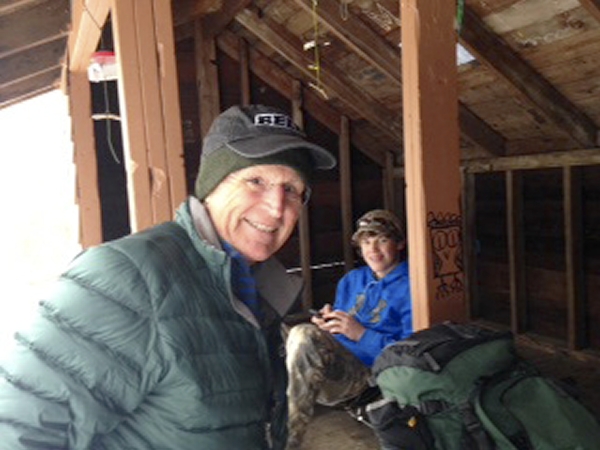 Bob Harris, left, and Walker Shellhorn take a break in a shelter while hiking the Appalachian Trail in western Virginia in late February. Submitted photo

Bob Harris is in the process of putting the Appalachian Trail behind him — bit by bit.

A Salisbury resident, Harris, 74, is hiking the Appalachian Trail in sections. Harris has completed 580 miles of the 2,180-mile trail. He started at its southern end in Springer Mountain, Ga., and has made it north to Bland, Va., a mountainous area close to West Virginia.

On weekends, when he can find someone foolish enough to accompany him on one of his grand adventures, Harris takes to the trail, typically knocking back 30 to 35 miles over the course of three days.

Once he’s completed a stretch, Harris returns a few weeks or months later to resume his quest, picking up where he left off.

“If I live long enough, I’m going to hike every bit of it,” he vowed.

He’s well on his way.

The Appalachian Trail is a National Scenic Trail. It’s one of the world’s longest continually marked footpaths, stretching from Georgia to Maine.

Harris has had a lifelong love affair with the outdoors, but until about 15 years ago, had never ventured onto the Appalachian Trail.

For a number of years Harris lived in Columbus, Ga., and stayed in touch with one of his friends there, Tom Dennis, after moving to North Carolina. Dennis told Harris he wanted to complete the 75 miles of the Appalachian Trail that stretch through Georgia.

Dennis decided this despite having never been a camper.

“His wife told me she wouldn’t let him go in the woods with anyone but me,” Harris said, laughing.

The two did the Georgia segment on weekends as time allowed, reaching North Carolina in 2003. After that, Dennis was done, having conquered all of the trail he was interested in conquering.

But before long, Harris decided he was going to continue and see where the trail led him. His son, Michael, joined him and the two hiked the trail through the North Carolina mountains.

Harris has done a five-day, 65-mile stretch on his own, but he usually has a companion. His daughter, Beth, and a handful of others have hiked with him. Harris’ most-recent backpacking compadre is Joseph Cataldo. They’re both members of First Presbyterian Church in Salisbury.

Others join in when possible. The last weekend in February, 16-year-old Walker Shellhorn, an Eagle Scout and Salisbury resident, was at Harris’ side as he completed a 34-mile stint through the cold and snow of rural Virginia.

Harris admitted that a number of his acquaintances question his sanity when he takes off for a weekend on the trail, scaling mountains that would be a test for a man half his age.

“People can’t imagine not sleeping in a bed at home if you have a choice,” Harris said. “Most people, they think I’m crazy.”

Admittedly, some stretches of the Appalachian Trail have proven more strenuous than others. Harris recalled an 11-mile hike near the North Carolina/Tennessee border — from Fontana Dam to Shuckstack Mountain — as one of the most exhausting he’s encountered.

“That about whooped me,” Harris said. “It was just up and up and up with no letup.”

Harris typically sleeps in one of the three-sided shelters that are spaced about every 10 to 15 miles along the trail. But he improvises when things don’t go according to plan. He’s been known to bivouac in a foot of snow when he had no other options.

­­­­­Shuttles play a role in Harris’ hikes. He usually parks about 30 miles ahead of his last stopping point, at a place where the trail crosses a highway. Someone then drives him to where he left the trail, and he hikes back to his car.­­­­­

Harris was born in Old Fort, a community in western North Carolina that’s within sight of Mount Mitchell. When he was 16, he and a friend hiked 25 miles to the top of that mountain and back — his first backpacking jaunt.

Harris graduated from N.C. State University and spent the first half of his career in management with Fieldcrest Mills. He worked for the textile manufacturer in Fieldale, Va., Eden, N.C., and Columbus, Ga. A plant manager, he eventually rose to the rank of a company vice president.

But things went south for the textile industry and, in 1989, shortly after being transferred to Kannapolis, Harris found himself out of a job. He eventually founded Piedmont Footings, a Salisbury firm that digs and pours foundations for new homes and school expansions.

Harris and Fred Bryan are now partners in the business.

“I tell people, ‘I went from being a company vice president to digging ditches,’ ” Harris said, laughing again.

Business is good and Harris continues to work four days a week, taking off Fridays to serve as a volunteer at Overton Elementary School in Salisbury.

Harris is a slim man who looks younger than his age. He tried to retire when he turned 65. A few weeks of idle time convinced him he’d made a mistake.

“I was about to go crazy,” Harris said. “I didn’t know what to do with myself. I finally went back to Fred and said, ‘Don’t you need a helper?’ ”

Harris and his wife, Margaret, have been married 55 years. They have four children and eight grandchildren. The marriage has endured despite a difference of opinion when it comes to camping.

“Margaret, she’ll hike all day, but she’s not about to spend a night sleeping on the ground,” Harris said.

Cataldo, Harris’ most recent hiking companion, said the two follow a routine on the trail. They hike about 45 minutes, then rest for 10 or 15 minutes before resuming the trek.

“We’re not in any rush,” Cataldo said. “We’re not going to set any speed records.”

Speed doesn’t concern Harris. The longest anyone has taken to complete the Appalachian Trail in sections as he’s doing was 35 years, he said.

Harris joked that if he lives to be 100, he might be able to break that mark.

“I remember being excited hearing about the Appalachian Trail when I was growing up,” Harris said. “The idea of being out there for 2,000 miles, I thought that was something I might do when I quit working. It hasn’t worked out quite the way I expected, but that’s all right, too.”