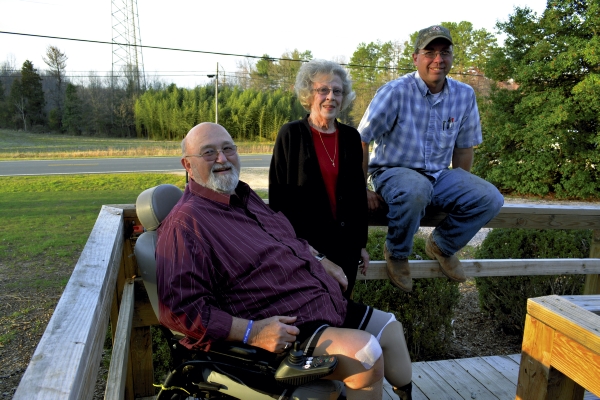 Jimmy Ritchie, left, is the recipient of this year’s Love Thy Neighbor road race on March 19 sponsored by Concordia and Trinity Lutheran churches. With him are wife Judy and son Jason, who’s been an organizer of the race for the past three years.

“It’s unbelievable,” says Jimmy of the honor. “I’ve always been giving instead of receiving.”

“It’s coming back to you full force,” wife Judy tells him.

“However this thing turns out — and we know it’s going to be good — Jimmy has been such a presence for so many others,” says the Rev. Ken Reed of Concordia, the family’s pastor. “He treats adults and kids with the same joyfulness. Jimmy just has a warm, unrelenting personality.”

During the planning of this year’s race, several people approached Jason about raising money for his daddy. He immediately felt it would be a conflict of interest for him to participate this year, and asked Crystal Karriker, his co-organizer and frequent running partner, if he should step back.

No, she said. Just continue to keep doing what you’re doing, she told him.

Jason and Crystal lead the effort to organize the race route, which begins at Concordia and heads out into the rolling countryside of Atwell Township. Last year, the event raised nearly $27,000 for Ivey Cline, a member of Trinity Lutheran Church. That congregation became involved in the event, and continues to participate this year.

Jason did not know Ivey when the decision was made to hold the event in her honor.

“It was overwhelming,” Ivey says. “Just being in that kind of community is amazing. I knew last year I wanted to be a big part of the event this year. I was bowled over by the amount of people who came and ran and who gave donations.”

Ivey, a single mother of three daughters, is a breast cancer survivor. Thanks to the fundraiser, she was able to pay nearly all of her medical bills. She was able to walk the route last year and would like to do so this year.

Ivey is helping with the silent auction, a segment which, like the rest of the event, has grown every year.

“I would like to be in the 5K, but I need to make sure everything is covered inside,” she says.

Ivey recently had a six-month check-up with her doctor, and will see him again in another year.

Jimmy did not get to participate in last year’s fundraiser, because he had to have his left leg amputated below the knee during that time.

Otherwise, Jimmy is a fixture at Concordia and in the Saw community. He worked for 49 years at Linn-Honeycutt Funeral Home, and is the owner of Mobile Wash, Inc. It’s now being run by Judy’s son, Tommy Schenk. Judy’s daughter, Delana Davis, keeps the books for the business. Tommy also takes Jimmy and Judy to doctors’ appointments, and wherever they need to go.

“He does an awesome job,” Jason says. “We all have our jobs in the family.”

Jimmy has trouble walking because his right knee tends to give way. He gets around mainly by power chair, and the one he has is used. He also uses a lift chair, which is in his living room, and even sleeps in it.

“I just can’t get in out of a regular chair,” Jimmy says.

He’s had that chair for a long time, and Tommy has worked on it several times to keep it going.

“This needs to be replaced,” Crystal says. “But they’re not cheap, and power chairs aren’t cheap.”

Crystal hopes that funds raised will help Jimmy with needs like this, as well as ongoing medical expenses.

Nephew Greg Ritchie built a handsome ramp, which enables Jimmy to get in and out of his split-level home. He also built a handicapped-accessible bathroom and roll-in shower while Jimmy was in rehab.

Jimmy has depended on the love of his family and his church family over the past year.

“What pulled me through was my church bunch,” he says.

And, of course, his grandchildren. He adores Lauren Ritchie, 13, the daughter of Eddie and Elizabeth Ritchie, and Jacob Ritchie, 11, and James Ritchie, 9, Jason and Jenni’s sons. Another grandson, Brandon Talbert, is deceased. Photographs of all the grandchildren cover one wall in the den.

Jimmy had no pain in his left leg, but had to have part of it removed once gangrene set it.

“The whole experience was phenomenal,” Jason says. “They saved his life.”

Jimmy admits he gets depressed at times, because he’s no longer as active as he wants to be.

Also doing well is Erin Dabbs, a member of Concordia who was the recipient of funds from the inaugural race.

In 2011, Erin was diagnosed with a benign brain tumor that had wrapped itself around her auditory nerve. Erin, who lives in Rockwell, is a first-grade teacher at North Rowan Elementary School. On Thursday, she’ll undergo a procedure to restore her hearing.

Still, Erin hopes to be there next Saturday, as will Jason, his wife and boys — all of whom will run.

The event — which also features a fun run for kids — is open to all walkers and runners, Crystal says. “And if you don’t want to run, we have a full country breakfast that’s available by donation.”

She adds, “It’s a totally different kind of race. You don’t get a T-shirt, and there’s no placement by age groups, just our three overall winners. You’re here to support the cause.”

That’s exactly what Jimmy and his family plan to do.

Crystal and Jason have plans to continue the event after this year, she says. “You don’t have to look far for someone who needs help.”

“And you never know when it will be you,” Judy says.

For more information about the Love Thy Neighbor event, visit www.facebook.com/LoveThyNeighborRace/.