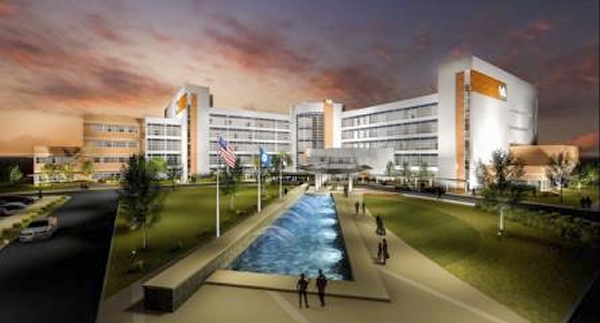 The Charlotte Veterans Affairs Health Care Center, scheduled to open in April, will provide easier access to care for veterans in the Charlotte-Mecklenburg area and surrounding region. (VA rendering)

Laurels to the imminent opening of the new Charlotte VA Health Care Center, one of the largest VA health centers in the country and part of the Salisbury VA Hospital System. An open house was held Wednesday at the Charlotte center, located on  35-acre site at 3506 Tyvola Road. Veterans who have been driving to the Salisbury hospital expressed relief at having easier access, according to a Charlotte Observer report. At least one vet also liked the fact that everything was in one building, as opposed to the many buildings on the Salisbury campus.

“It’s time to do things in a better way,” Salisbury VA Director Kaye Green said at the open house. She was referring to the fact the new center plans to offer same-day appointments with primary care doctors. It will also allow patients to make appointments with specialists while still at the center instead of having to go home and wait for a callback. Green also talked about improving the telephone system so that voice messages do go unnoticed, which she said was the No. 1 complaint she heard. The new, $104 million center won’t do everything; it’s strictly for outpatient use. Veterans who need hospitalization will still come to Salisbury. But it improves access for thousands of veterans and relieves some of the pressure on the Salisbury hospital. This is progress for our region’s veterans.

Dart to the name-calling and rancor that have been on display during GOP presidential debates. Thankfully, the candidates stepped back from that approach during Thursday night’s debate and discussed substantive issues. Donald Trump set the tone by dropping the insults. The first phase of his campaign is said to follow the negotiating style he describes in  his book, “The Art of the Deal” — parts bluff and bluster, cajoling allies, intimidating opponents and fighting back hard against “losers.” He is changing his tune now to win over Republican Party officials who are skeptical of his candidacy. If Trump makes nice, will the followers who have fed off his anger change too?

Laurels to Food Lion for stepping up to remodel 142 stores in the Charlotte area, including Rowan County, to embody its “Easy, Fresh and Affordable” campaign. The supermarket chain announced it will invest  $215 million in the transformation, even as it donates $1.5 million to the Second Harvest Food Bank of Metrolina’s warehouse expansion. The store remodelings come as retailers everywhere grapple with how to attract the business of millennials — “a most curious and confounding generation,” Hartman Group CEO Laurie Demeritt said in a recent Supermarket News column. They are also the largest generation, now outnumbering Baby Boomers. As traditional grocers struggle to compete with stores like Wal-Mart and Costco on pricing, and Whole Foods on the shift to less-processed foods, Food Lion’s emphasis on “Easy, Fresh and Affordable” may hit the mark.