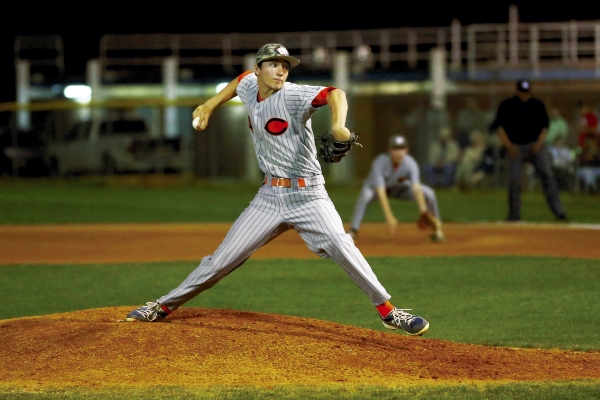 James Sipes/for the Salisbury Post ... Carson pitcher Owen White fired a one-hitter against West Rowan last night in Mount Ulla. White struck out 15 Falcons and also had three hits at the plate, leading the Cougars to an 11-0 victory.

The Carson right-hander used a fastball packed with precision and attitude to strike out nine of host West Rowan’s first 11 batters in what became a suitable-for-framing pitching performance.

“The kid’s got crazy talent,” catcher Ryan Bearden said after the Cougars (4-1, 3-1) gained a six-inning 11-0 South Piedmont Conference victory and moved into a tie for first in the crowded league standings. “And a great work ethic. When he’s throwing like that it almost impossible to hit him.”

White had a crackling fastball that topped out at 91 miles-per-hour midway through his complete-game one-hitter. He finished with 15 strikeouts — including four in the sixth and final inning — and issued no walks. The only thing not to like about White was having to face him.

“He had that great fastball,” West coach Seth Graham said after the Falcons (4-2, 3-1) sent only 20 batters to the plate. “And he had that breaking ball which he didn’t really need. He pounded the strike zone.”

White struck out the side three times and allowed only three base-runners. Outfielder Kacey Otto had West’s only hit — a ground ball single to right field in the last of the first inning.

“We had this shaking method going on,” White, just a sophomore, said. “I’d shake (Bearden) off as many times as I wanted until I got the pitch I wanted to throw — usually a fastball outside. If they got a bat on the ball, I’d move it back inside. I used everything I could.”

White out-pitched UNC recruit Austin Love, West’s junior right-hander who consistently threw in the high 80s. Love struck out eight and walked none in four innings, but was tagged with his first loss after yielding Carson’s first two runs and five hits.

“We jumped on him fast. That’s what helped,” outfielder Brandon Mock (3-for-4, 2 RBIs) said after reaching base four times. “When we use the whole field we’ve got one of the best hitting teams in the conference.”

Carson had 14 hits against four West pitchers, including three doubles and Cameron Prugh’s sixth-inning triple. The Cougars opened the scoring in the top of the third when White and Mock delivered run-scoring doubles against Love. Olen Stamper relieved and allowed a fifth-inning run when he hit Carson’s Ben Shoaf with the bases loaded and two away.

“I was more impressed at how we put the ball in play and used the whole field,” said Carson coach Chris Cauble. “We expected a dogfight, facing a Division I signee. So it was good that we were able to scratch out a few runs early.”

Carson busted the game open against West’s leaky bullpen in the top of the sixth inning. It sent 13 batters to the plate and scored eight runs against Stamper, Brandon Walton and Brett Graham. Key hits were Prugh’s screeching hit to right, White’s second RBI-double of the game and run-scoring singles by Mock and Grayson Whicker.

“We’ve got the ability to be a great-hitting team and we showed it tonight,” said Bearden. “Our coach preaches using the whole field. Tonight, we all bought in.”

No one was happier about that than White. He went 3-for-5 despite grounding into an inning-ending double play in the sixth. He finished off the Falcons all by himself, fanning Graham on a 2-2 curveball to end the game.

“We brought the whole team with us tonight,” he smiled afterward. “Especially the bats. But (Cauble) always tells me to have confidence in myself on the bump. Even when things go south, have confidence. That’s all it was.”

NOTES: West’s other baserunners were catcher Trevor Atwood — who reached on a fifth-inning error before courtesy runner Tommy Wilmot was picked off — and Wilmot, who struck out as a sixth-inning pinch-hitter but reached when Beardon tossed strike three into right field. … Walton shattered a stadium light near the West dugout when he fouled off a pitch in the West fourth.