Bill Williams: Looking back can be pretty fun 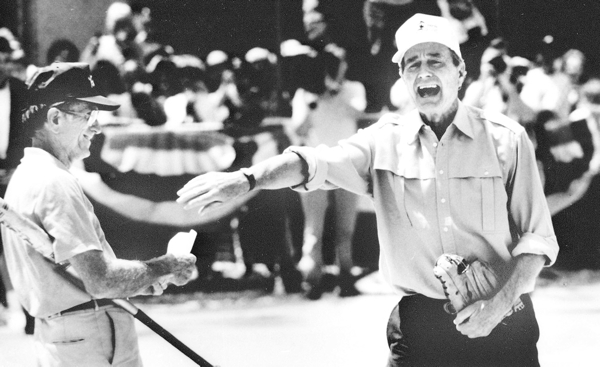 'GET OUTTA HERE!' President George H.W. Bush, right, reacts during a 1992 visit to Faith after Bill Williams, left, reminds him of the last time the two were on a ball field together.

It was a husband-wife, after-dinner lollygag that evolved into a “Hey, look what’s coming up!”

Well, what’s coming up is the fact that I’ll be just about footloose and giggling as of now. No more deadlines. No more bad dreams. Sleep late. Do what I want to do. Mostly …

She (my wife, Betty) said that she remembers back when Duke University offered only one journalism course, and that I took it. I had no idea that it would lead to anything significant.

Once I got a foot in, however, I never pulled it back. Over 65 years now. Quite a while.

Betty reminded me that I had planned to teach and coach. Said that it took just one term of practice teaching the sixth grade to head me in another direction. I call it Divine Intervention.

“Strictly by chance,” she said, “you learned of a reporter’s job open on The Gazette. Within a week, your career switched to journalism, never dreaming it would continue well into the next century.”

She went on to remind me of the multitude of people who sat for my questions and camera’s naked eye to give answers, some of which are still echoing out there somewhere.

“They were rich and poor, big and little, young and old. Thousands of columns. You did a great job, and I am proud to be your wife.”

So now, an update:

Down through the years, I have written thousands of columns and taken pictures. A few columns seem to have risen to the top and remain there. I’ll name a few:

The day I played ball against President Bush.

George H.W. Bush had flown into my hometown of Faith near Salisbury to make a speech and ask voters to give him four more years in office.

He had played first base for Yale, and 50,000 patriots were on hand.

I had played a little baseball at Duke and was at bat when they gave Bush a first-base glove for practice. I told Gov. Jim Martin, standing nearby, that this was the second time that the president and I had met on the ball diamond. The governor rushed to deliver the message, and the president trotted over to renew old acquaintances.

I met him with this message:

That’s when he bounced a blow off my shoulder and shouted: “GET OUTTA HERE!”

A Salisbury Post photographer was there and made the shot that ran front page in papers in this country and others. A keepsake.

Hearing aids. Love ‘em; hate ‘em. They are intermingled with much of everything I write. One day I lost one at dinner and didn’t find it until I got home. Inside my drawers. I still have trouble with that one.

My days as a shoeshine boy in my brother’s barbershop and “Chattanooga Shoeshine Boy” playing loud and steady. Much column material there, much of which I couldn’t print.

Those treasure days at Lake Lure. We went there for long weekends in the fall with good friends. Some of us took it seriously. We built a house there. We took our kids there. We watched as they climbed the ladder to adulthood and moved out on their own. We started a newspaper there, sold it after 17 years; it still is published.

You get the drift. It was all good.

Darrell “Bill” Williams grew up in Faith and recently retired from the Gaston Gazette, where he was editor many years. This column was initially  published in the Gazette on March 7.