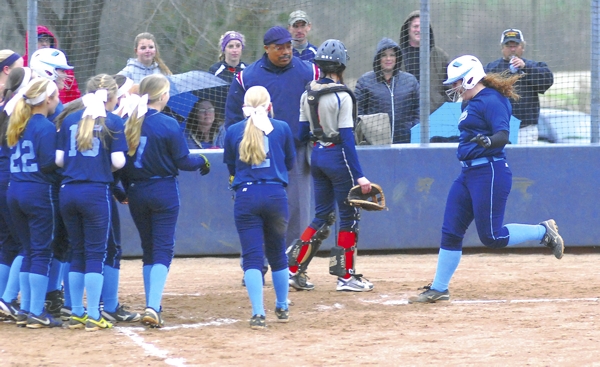 ADAM HOUSTON/THE SALISBURY POST ... West Rowan's Peyton Greene (right) celebrates a home run as her teammates wait for her at home plate in a game last year. West is expected to be strong again in 2016.

MOUNT ULLA — West Rowan’s softball team is missing two stars, but the Falcons return Peyton Greene, Parker Greene and Taylor Martin, and they could contend for a third straight South Piedmont Championship.
“We do have two big holes,” West coach Jimmy Greene said. “Hunter Gibbons (Western Carolina) and Marissa Yow (Radford) were tremendous players, Division I players, and girls like that aren’t easily replaced. They gave us a lot of our power, so we’ve got to find our offense.”
Gibbons and Yow combined to blast 35 extra-base hits in 2015, so West expects to have to manufacture more runs this season with aggressive base-running.
“We’re not going to be able to sit back as much and wait for Hunter or Marissa to drive people in,” Coach Greene said. “But we’ve still got a good group of girls and we do have some speed.”
The Falcons (3-0, 3-0 SPC) have been fine on offense so far. They scored 35 runs in their first three league games.
Adding to the excitement, the Falcons are playing home night games for the first time, starting tonight against Carson.
West has turned in back-to-back 18-6 seasons and also went 13-3 in the SPC both times. The toughest challenges for the Falcons in the SPC this season figure to come from Cabarrus schools — Central Cabarrus, Cox Mill and last year’s tournament champ — Hickory Ridge.
“We’re going to have a good team and we like our defense,” Coach Greene said. “But there are some positions that aren’t set yet and the lineup isn’t set.”
Greene’s daughters will form a powerful battery for the Falcons, with Peyton, a senior, returning in the circle, and Parker, a sophomore, moving from center field to fill Yow’s shoes at catcher.
While Gibbons won her second straight county and conference player of the year awards in 2015, both Greenes were right behind her.
Peyton’s two-way season was phenomenal. She batted .464 with five homers and 28 RBIs, while going 16-6 with 146 strikeouts and a 2.54 ERA in the circle. She’s the top returning player in the county and pitched a no-hitter on Tuesday at South Rowan.
Parker batted .513 as a freshman with 28 RBIs. She had five triples and eight doubles.
As part of West’s defensive musical chairs, Martin, an all-county player headed to Catawba, shifts from second base to center field. The 5-footer will again be the little engine that ignites West’s offense from the leadoff position. She batted .300 with 28 runs and 17 RBIs last season.
Other experienced players returning include junior right fielder Khara Fesperman (13 runs, 10 RBIs), sophomore first baseman Morgan Corriher (.226, 13 runs), junior Savannah Cline (.234, 10 RBIs) and sophomore Camryn Nooner (.226, 9 runs).
The key addition to the lineup will be freshman Mary Sobataka. She replaces Gibbons at shortstop and also swings a quick bat. She mashed two homers at South Rowan on Tuesday.
Sophomore Alex Linder will also be important offensively and defensively. The plan is for her to replace Martin at second base.
Because of West’s basketball playoff run — five of the softball Falcons were on the varsity basketball team — West had only had one full practice before the season started.
“I was happy watching those girls win a lot of basketball games,” he said. “But it would’ve been nice to have two weeks to get ready.”
Coach Greene is counting on seniors Peyton Greene and Martin to lead the team.
“They’ve won championships and they know what it takes,” he said. “Last year I did some of my best coaching sitting on a pickle bucket and letting the seniors talk. We’ll have that kind of leadership again this year.”