Come to the ‘Cabaret’ for a memorable evening 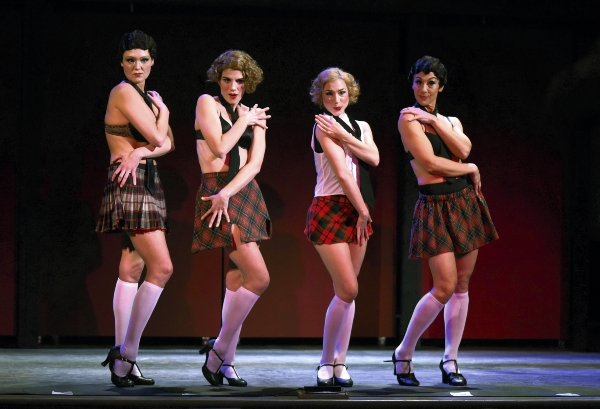 “Life is a cabaret, old chum. Come to the cabaret,” Sally beckons, and so, we do. We sit down in the old dive, watch the Kit Kat girls show off some leg and other things, and we forget, for a little while, that the Nazis are coming.

In Piedmont Players’ production of “Caberet,” the 1966 musical about Berlin just before World War II, there’s laughs, song, dance, naughty innuendo and naughty men and women. Life is a party, after all. Come drink the wine, come, see the girls. Willkommen!

It’s only later that the audience begins to understand a storm is brewing, an ill wind blowing hard against the fantasy. With a dramatic and sobering ending, the opening night audience sat stunned for a few seconds before rising to give the cast an ovation.

Tod Kubo directed and choreographed the show, with Reid Leonard’s dark and sparse stage and subdued lighting. The movements were evocative, expressive and yes, naughty, though nothing compared to a Super Bowl halftime show.

Placing the excellent little orchestra above much of the action gave the eye something to study — band members as characters, with Mike Wilkins as a fully engaged conductor and pianist.

When Sally sings “Cabaret,” it is with a bitter irony that fits the second, more sobering act perfectly. In contrast is her teasing, powerful “Mein Herr,” a song telling her man she’s through.

Coulson, of course, has several chances to steal the show, first with “Willkommen,” later with “Two Ladies” and a song that contains more truth than we care to admit, “Money.” It makes the world go around.

Coulson knows how to play the shocking moment, especially in the final scene, which is simply chilling.

Tim Campbell is American Clifford Bradshaw, visiting Berlin to write his novel, after failing in London and Paris. His naivete quickly vanishes as he spends his first night in town at the Kit Kat club, with close encounters of the female and male kind.

It’s all terribly decadent and so much fun.

The menacing Ernst Ludwig, played by Paul Reeves Leopard, sees Cliff as an easy mark for his underhanded needs. He grows more and more dangerous, simply by his presence as the story unfolds.

Wendy Weant is an endearing Fraulein Schneider, with her marvelous voice, her sense of nervousness and her real fear in the second act. Her “What Would You Do?” is a heartbreaking realization of the horrors that will come to Berlin and all of Europe.

Andy Abramson is a gentle, sympathetic Herr Schultz, a fruit seller and boarder of Schneider’s, making what happens all the sadder and more threatening.

The Kit Kat girls, Ashlyn Keller Sumner, Dana Ribelin, Leah Campion and Yessena Whitfiled have energy, smiles and moves to convince the crowd that they really are cabaret girls.

Ed Whitney has that voice that can be menacing and his parts in the show certainly take that tone.

The rest of the orchestra, dressed as a cabaret band might be, includes Paul Fisher on drums, Andy Dawson on upright bass, Reese Manceaux and Jeff Tippett on reeds, Christian McIvor on trumpet and Lucas Hullet on trombone. The music, sometimes brash, sometimes haunting, is what sticks in the brain, as much as the implication that life as we’ve known it is over.

The first act is a long one, and has a different ethos than the second act, which is even darker and more sobering. The second act puts the problem of the Nazis front and center, leading to the ending that is far from happy.

“Cabaret” has been reinvented several times over the last decades, its emcee changing from a heavily made up man in a tux to a slightly freakish gender bender. The tone, though remains the same.

The play ends around 10 p.m., with a 20-minute intermission, and some material is not suitable for children, nor will they understand what is happening. Ed Brown is the producing partner of the production, which continues tonight and Saturday and March 16-19 at 7:30 p.m., with a matinee this Sunday at 2:30 p.m. For tickets, call 704-633-5471 or go to piedmontplayers.com.