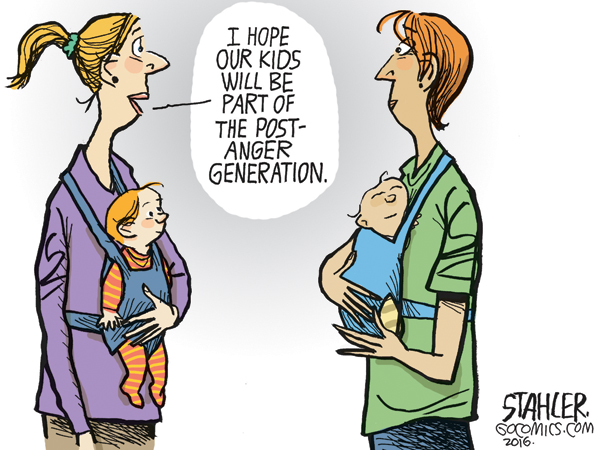 Trump is a hard worker, not a player!

Bergeron said water boarding is a form of torture, which is his opinion, and crosses from reporting into editorializing. So yes, I do know the difference between fact and opinion. My opinion is that you do not know the difference, and that you vary the rules according to whether you agree with the speaker or not.

By creating scapegoats (Mexicans, Muslims), Trump appeals to folks who have experienced stagnant wages the past several years. He’s wrong. Slow wage growth is a result of globalization and technology — neither of which can easily be stopped. Trump isn’t the savior. If elected, that truth will be revealed — but he will craft a lot of damage in the interim.

Trump is no stranger to hard work. He’s been seen urging his workers to pick up the pace on a construction job and then pulling off his jacket and jumping into the fray to set an example. This, during the heat of the afternoon and, for three hours until quitting time. This was not done in front of the press.

… Vote ‘yes’ on bond, invest in our future

Raise the taxes on those that can afford them. The GOP has raised taxes on you people, but most of you are too stupid to realize it. No to any bond money. Do your work in Congress and take the money from the corporations, who should help build infrastructure. They use it to their advantage, so why not a surcharge?

I liked the bond when first proposed. However, the gutting of the package that the General Assembly performed turned me off. Gone were the funds that were the main impetus for the bond itself, that being transportation funding for roads and other infrastructure. Nothing got left for K-12 education. Instead, you have pet projects that smells of so much pork you’d think it was a hog farm.

Absent was how people of color feel they are not woven into the fabric of this city nor do their thoughts and opinions matter. This is evident by a quote that was shared with me recently by a city leader: “People are happy and things are good here, but some people only want to dredge up and focus on the negative.” No, there are people in this city suffering and not everyone is happy and skipping down the streets.

… I will not try to appeal to or wait for anyone’s moral compass to align to give me a sense of respect and inclusiveness. This was what I meant in the example I shared with you of why I don’t sing the song, “We Shall Overcome.” I believe in the fierce urgency of now.

Kenny Hardin is a man you can count on. From our earliest days as friends in high school, that was obvious. His moral compass is true.

For sure, he does not ascribe to the normal trappings of politicians. And he calls things as he sees it. But have open minds and I predict you will find no public servant more committed to improving Salisbury. For everyone.

Mr. Hardin won’t take marching orders from certain members of Salisbury’s wealthy elite who really control this city, albeit from the shadows.

Folks from the favored “high voter turn out” precincts in council elections need to be reminded that city problems like the $3 million annual Fibrant subsidy, violent crime and drugs do not stop at artificially drawn neighborhood limits. We all drink the same water. …

The city needs to invest in programs that are designed to impact the lives of these youth via job training and entrepreneurial opportunities. It would also be prudent for the Police Department to consider employing or contracting individuals that have the relevant expertise to interact with youth.

Councilman Hardin continues to inform the city administration about the need for real and honest dialogue with the stakeholder community. Maybe it’s time that city and community leaders listen, rather than continue to attempt to force him to see it as they do.

The 500 block of North Main Street is really the ideal location for the central office. At this location, they now have their own off-street parking. So there is no competition for scarce downtown parking that is vital to commerce. Good job!

… Parks getting a shot at pro football

Now you can show the NFL what they missed out on the first time. Go, Falcons!

Keep that chip on your shoulder and get it done. Looking forward to seeing you play!

Congratulations, KP. We’ll be cheering you on.