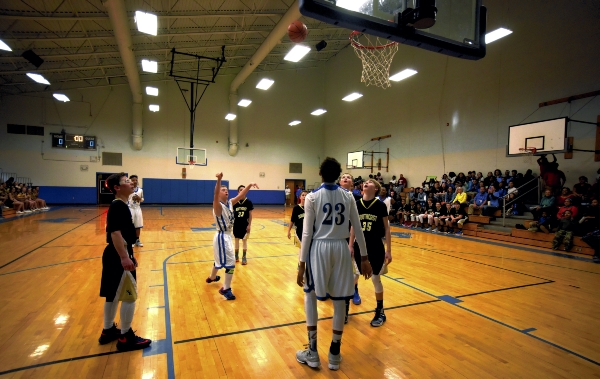 Jared Perdue takes a shot under the basket as the whole gym watches. A seventh-grade special needs student at North Rowan Elementary School, Jared was given the opportunity to take the court with the seventh-grade basketball team recently. Jared took the ball after tip and made his way to the Maverick basket and, after a few tries, put the ball in the hoop to the excitement of both the home team and the visiting team from Southeast Middle school. After a short time, Jared came out of the game and was given his own basketball with his name written on it. Jon C. Lakey/Salisbury Post

SPENCER — A deafening cheer erupted in the gym as Jared Perdue scored the opening shot at Monday’s North Rowan Middle School basketball game. Spectators rose to their feet, stomping on the bleachers and yelling, “Go Jared!”

Even parents and family of the rival team cheered.

Jared, a seventh-grader, is a special needs student at North Rowan Middle, and he’s got quite the toss. North Middle’s CCAC class goes into the gym to shoot basketball every day, and it was there that Jared caught the eye of boy’s basketball coach Reggie McConneaughey.

It was McConneaughey’s idea to have Jared score the opening points of Monday’s game.

“I just wanted him to be involved in the last home game,” he said.

McConneaughey, who Jared has nicknamed “grandpa,” also works as a long-term substitute, and is familiar with working one on one with special needs students. But when he, Hamrick and CCAC teacher Sherry Wilhoit began hatching their plan last week, there was something McConneaughey didn’t know.

“I didn’t know it was his birthday,” he said.

Jared turned 14 Monday afternoon, and as he sat on the bleachers before the game, dressed in North Middle’s blue and white and sporting a pair of Nike tennis shoes, he said he thought it was a great birthday, though he was a little nervous.

But his school was behind him, 100 percent. As Jared was announced on the court, North Middle students clapped and waved signs made by Hamrick’s class.

Jared’s very involved at the school, she said, and loves sports — he started off a wrestling match in fall. He’s outgoing, funny, friendly and a “lady-killer.” If you ask him, he’ll tell you that he has a girlfriend at North High.

During the first minute of the game, Jared dribbled up the court and scored the first point. The crowd went wild. On his second shot, he fumbled and missed, a little nervous, but both sides of the gym urged him on as he tried again. Later, he was given a basketball that was signed and decorated by the art teacher.

Wilhoit said that’s what she loves about North Middle.

“I’m just thankful we have a school that embraces our diversity and special needs kids,” she said.

But what she and others at the school love about Jared is something different: he’s kind, and puts others before himself.

“I just think Jared makes the world a better place,” she said.

The home of Mary Lynch: A sanctuary of temperance