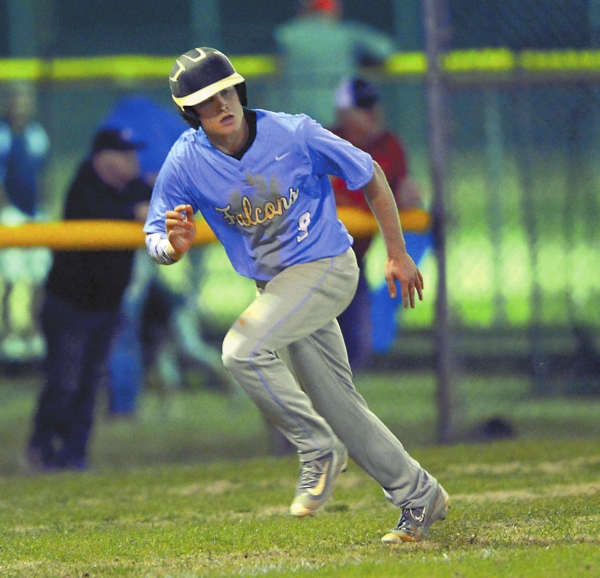 MOUNT ULLA — No baseball coach has figured out a way to defend the walk, and free passes — an endless string of ball-fours and hit batters — were the biggest reason West Rowan destroyed Salisbury, 18-1, in five innings on Thursday evening.
West sent 38 men to the plate in the abbreviated contest. Twenty-six reached safely. It got absolutely ugly during West’s 10-run fourth inning.
“We gave them 15 base runners with walks and hit batters,” Salisbury coach Mike Herndon said. “The bottom line is you’ve got to throw strikes, and we didn’t. That wasn’t baseball out there. I’ve never gotten beat 18-1 in my life.”
Lee Poteat got on base all day for the Falcons as the leadoff man.
West Rowan (4-1) also swung the bats a little in the non-conference game. Kacey Otto knocked in four runs with three hits. Brett Graham had a pair of two-run doubles, one of them a missile to the right-field fence, and knocked in five.
“I’d been struggling a little bit, but (assistant coach) Brett Huffman boosted my confidence for this game,” Graham said. “He told me he believed in me, and it was good to see some balls fall in.”
Salisbury’s 10-4 win against South Rowan on Wednesday had some impact on the events that transpired in Mount Ulla. That score got the Falcons’ attention.
“We saw that Salisbury beat South and it was a shocker for us,” Graham said. “It made us come prepared to play from the start. We played the way we’re supposed to play.”
Baseball can be humbling. That was the case for the Hornets, who had beaten South for the first time in 16 years, 24 hours earlier.
“As good as we played against South, that’s how bad we were today,” Herndon said. “Our guys were feeling satisfied and you can’t do that. In baseball, you’ve got to get up every day with something new to prove and you’ve got to compete. I was disappointed with how we competed.”
On a day when nothing went wrong for West, Tyler Wheeler, a big junior known mostly as a football defensive lineman, was another positive. Wheeler hasn’t been on the diamond in two years, but he pitched four innings and held Salisbury to one hit — a solid one by Chandler Lippard in the second.
“Playing baseball is a great way to stay in shape for football,” Wheeler said. “I felt good out there, especially after we got some runs. All I had to do was throw strikes.”
West head coach Seth Graham had praise for Wheeler, who got his first varsity win.
“He pitched good at Mooresville (West’s only loss), but we didn’t make the plays for him,” Graham said. “He was good again today. He pounded the strike zone.”
Salisbury starting pitcher Hut Smith walked the first two men he faced and both scored when a solid base hit by Brandon Walton was misplayed.
Salisbury (2-2) scored in the top of the second when Alex Link’s foul sac fly plated John Yang, but the Falcons quickly made it 5-1 in the bottom half. Two HBPs set the table for Graham’s two-run double and a run-scoring infield hit by Otto. Those hits came against reliever Griffin Myers.
West got three more runs in the third and then batted forever in that 10-run fourth against Myers and Joe Steinman.
“We’ve got some young guys (notably Graham and Walton) who are starting to settle in and we played well and pitched well,” Coach Graham said. “Nothing went their way today, but Salisbury isn’t a bad team. When we go to their place next week, it could be a completely different story.”
That’s exactly what Herndon was thinking.
“We’ve got them again next week, and it will be different,” he said. “I can’t promise the result will be different, but I can promise our effort will be a lot different.”
•••
NOTES: Jonathan Luther pitched the fifth for the Falcons and allowed a sharp single to Marcus Corry. … Salisbury is short on pitching. Neither Will Steinman nor Jack Fisher was available for mound duty. … West entertains Carson tonight. Austin Love will pitch for West, with Owen White expected to hurl for Carson. They are the county’s two hardest throwers.