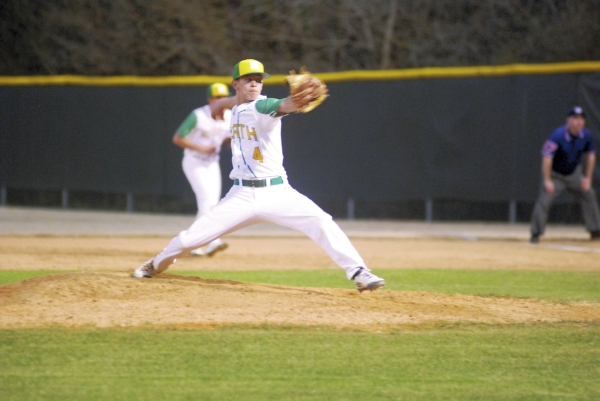 SPENCER — North Rowan had only six hits, but when added to 10 walks, the sum was an 11-1 high school baseball victory over Statesville here Thursday night.

And seeing that “11” in lights on the North scoreboard was a sweet sight for Cavaliers’ head coach Aaron Rimer, after his squad scored just one run total in recent non-conference losses at Carson and Central Cabarrus.

“Our guys had a different approach at the plate than we did in the first four games,” said Rimer, whose team is now 3-2. “We didn’t score in the first inning, but we hit four balls on the nose and that sort of set the tone. You can’t control where the ball goes, all you can do is control your swing and we did a great job at the plate today.”

Rimer was quick to point out that Statesville (1-4) is already in conference play (North Piedmont Conference) and the Cavaliers didn’t see the Greyhounds’ ace pitchers. Statesville was also coming off of a tough, 5-3, nine-inning loss to Mooresville on Tuesday.

“Statesville’s a good team,” said Rimer, “and while we were not seeing their one, two or three (pitcher), we’ll take it. We did score 11 runs tonight. The way we hit against Carson and Central Cabarrus, I’ll take anything associated with runs.”

Leading 9-1 with two outs in the fifth inning, North’s Steven Thurston hit a routine grounder to shortstop with runners on second and third bases. An out would have sent the game to the sixth inning, but a wild throw plated both Noah Gonzalez and Harrison Lentz, ending the game with a 10-run margin.

The big blow of the game had come in North’s six-run second inning. Catcher Jake Pritchard drilled a bases-loaded line drive to centerfield that was booted by the Statesville outfielder.

Pritchard circled the bases behind the other three runners in what some fans may have thought was an inside-the-park home run, but Rimer said it was clearly a hit and a three-base error.

“Jake hit it solid and two runs would have scored any way,” said Rimer. “But when it got to the fence, everybody scored. Jake can run … that’s why we don’t courtesy run for him unless there is someone slow in front of him.”

No one had multiple hits for the Cavaliers, but Gonzalez, Javin Goodine and Brandon White all had doubles.

Gonzalez (1-1) pitched four innings for the win, allowing three hits and striking out five batters. However, he struggled early with his control, throwing 35 pitches in the first inning when the Greyhounds scored their one run.

“The first two innings were tough for Gonzalez, but he found it and settled down in the third and fourth — but he was already up to 85 pitches,” added Rimer. “He only gave up one run despite not having control of his stuff. He’s got good stuff when he’s on.”

Left-hander Joe Harrison pitched the fifth inning, recording a strikeout in his brief, but smooth outing.

North has an open date today and returns to action on Monday with a 4:30 game at Uwharrie Charter Academy in Asheboro. The same two teams meet again next Wednesday in Spencer.