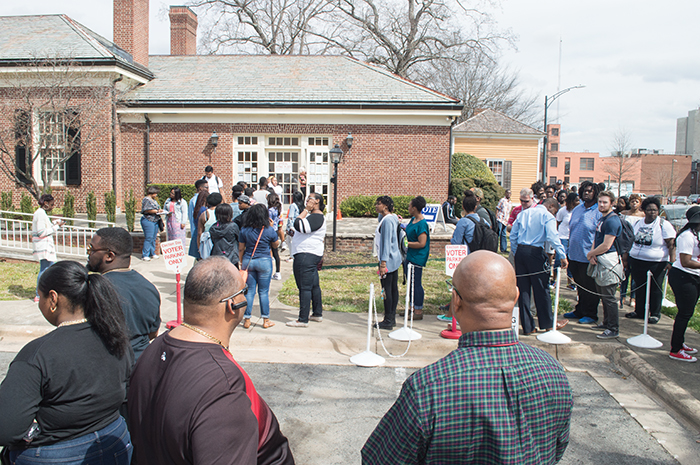 Josh Bergeron / Salisbury Post - A crowd of Livingstone students turned out to vote Wednesday at the Rowan Public Library Headquarters in Salisbury.

Hundreds of students and faculty walked from the college’s campus on West Monroe Street to the Rowan Public Library Headquarters on West Fisher Street. Terri Stevenson, the college’s associate vice president of student affairs, said the college organized the march to the polls as part of Livingstone’s “holistic learning environment.” Stevenson said it’s important for students to be politically active and aware of what’s going on in the community.

“We already make sure that when students are freshmen, that there’s a contract that they’re registered to vote, but we want to take that one step further, that they actually vote,” she said. “We just like to do it to show students how their vote counts and that collectively we can make a difference.”

It unclear exactly how many Livingstone students voted on Wednesday. Statistics provided by the Rowan County Board of Elections show 132 voters with Livingstone College as their address cast ballots on Wednesday. Elections Specialist Laura Russell said some students who voted Wednesday had off-campus addresses.

Some Livingstone College staff estimated as many as 300 students cast ballots on Wednesday. A total of 526 people voted Wednesday at the Rowan Public Library Headquarters. As of Wednesday afternoon, votes cast at the Salisbury site included 226 Republican primary ballots, 297 Democratic and three Libertarian ballots.

Livingstone NAACP President Devinae Haywood said the school organized its march to the polls during early voting so students would be able to register if needed. A total of 30 students who voted Wednesday also took advantage of same-day registration, which is allowing during early voting but not on election day.

“It’s more beneficial today than coming out on Tuesday and being denied the right to vote,” Haywood said.

Livingstone College Junior Jacqueline Baines was one of the students who registered to vote and cast a ballot the same day. Baines, from Florida, said she has voted previously. For many freshmen and sophomores, however, Baines said Wednesday was the first time they had cast a ballot.

“Our Livingstone students have a great history in civil rights and political activism,” Teamer said. “So, this is marvelous. I’m humbled. I’m so glad to see this. Right now, more than ever, we need our college students to get involved. They’re our future.”

Teamer said one of the NAACP’s goals is to engage students. There’s a nationwide effort called Souls to the Polls that aims to increase voter turnout, Teamer said.

Only the Rowan Public Library Headquarters will be open on Saturday for early voting.