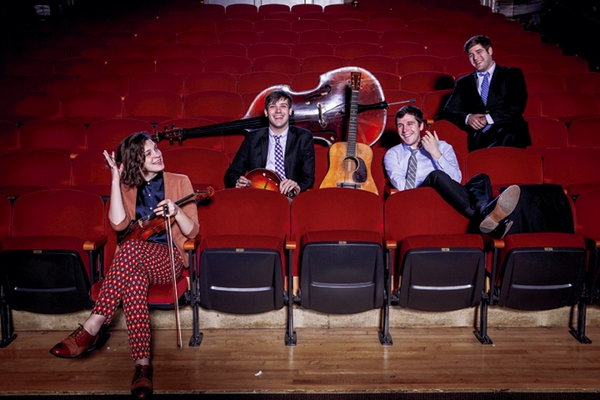 Before forming Mipso, Jacob Sharp (mandolin), Joseph Terrell (guitar), Wood Robinson (bass), and Libby Rodenbough (fiddle) were just classmates at UNC-Chapel Hill, where singing in harmony drew them together. The sound of their blended voices remains one of the band’s hallmarks. Since those college jam sessions, the four have entered a new phase of life, one where the work of making music — and the work of living — has become a more complicated affair.

Many of the songs on their new album, Old Time Reverie, grapple with the moral ambiguity that comes with keeping hope in a difficult world and making sense of its contradictions.

Their songs were born in the South and reflect its modern day complexity. “Our progressive college town shares a county with lots of old tobacco barns and farms and churches from the eighteenth century,” Joseph Terrell said. “We’ve chosen to stick around in this place where we’re rooted, to reckon with and learn from its contradictions.”

“We come from a place where traditional music is a living, changing thing,” Libby Rodenbough said. “So we feel like having an ear for all kinds of stuff is not only true to ourselves, it’s a nod to the tradition.”

Call it what you will -— to listen is to understand: it’s either unlike anything you’ve heard before or effortlessly familiar. By digging deeper and expanding further, Mipso have created their own dark daydream of Southern Americana: Their Old Time Reverie.

The concert is March 18 at 7:30 p.m. at the Lee Street theatre and Performing Arts Center at the Tom and Martha Smith Event Center, 329 N. Lee St.