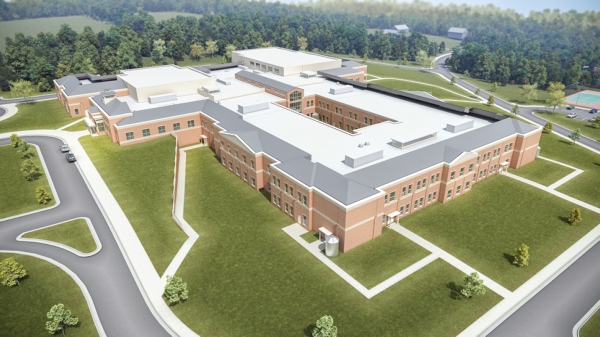 Kannapolis City Schools built the current middle school, located off Oakwood Drive, in 2005. At the time, the system was offered an adjacent parcel of land, but wasn’t able to purchase it until several years later.

“This has been a long time coming,” Todd Adams, chairman of the Kannapolis City Schools Board of Education, said.

The parcel has been waiting nearly a decade, but the school system kept running into funding blocks. The current plans have only been in the works a year, Kannapolis Middle School Principal Dr. Bridgette Reese said.

Reese said staff and students were allowed to have input on the extension’s design. As a direct result, the school will feature a therapeutic area – including a garden – maker spaces and comfortable furniture.

“It’s going to be a different kind of space,” she said.

Danita Rickard, vice chairwoman for the Board of Education, said she was excited for the day.

“It’s good to see it finally come to fruition,” she said.

The board in February moved to accept a base bid of around $32.77 million from building contractor Edison Foard, Inc. With 13 allowances, the total price tag comes to about $35.32 million.

When the extension is finished, it will house Kannapolis Middle’s seventh and eighth graders. And, after some grade shuffling, sixth grade will return to Kannapolis Middle School, and have core classes in the current building. The Kannapolis Intermediate School building will be repurposed into another elementary school for the system.