The home of Mary Lynch: A sanctuary of temperance 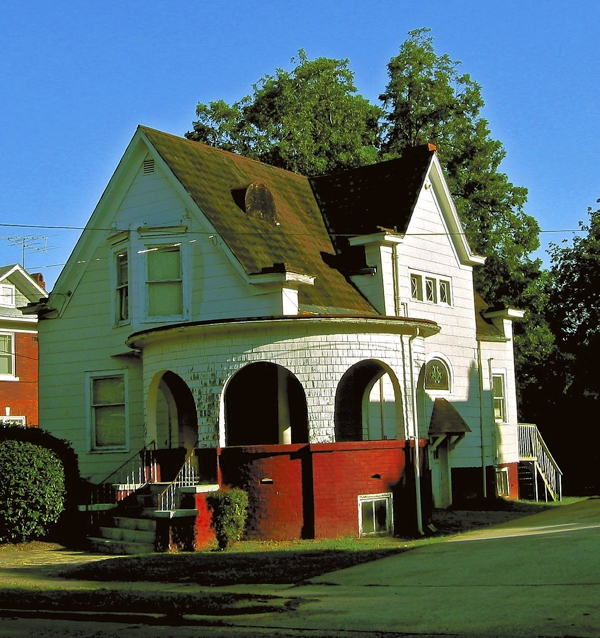 The Lynch-Nicholson Home at 624 W. Monroe St. is the first of six properties Livingstone College and the Historic Salisbury Foundation are renovating near the college. Photo by Reginald W. Brown

The Lynch-Nicholson Home is the first of six properties Livingstone College and the Historic Salisbury Foundation are renovating.

Its location is on the eastern edge of the college’s historic district at 624 W. Monroe St. in Salisbury’s West End. The single-family dwelling was built outside the former city limits in 1907 on a thoroughfare once known as College Avenue. The home’s circular front porch with Romanesque arches and Queen Ann architectural features may lead one to believe that James M. McMichael, the designer of the Cannon-Guille House at 202 S. Fulton St., had some influence on its design.

William H. Goler, Livingstone’s second president, built the home for Mary Alice Lynch and her mother, Maria Lynch, with the help of college students on a lot he sold her in 1906. A Charlotte native, Mary Lynch was a graduate of Scotia Seminary (Barber Scotia College), a member of Soldiers Memorial AME Zion Church, an instructor, librarian, and a staunch leader in the movement against the manufacture, sale and consumption of alcohol.

Mary Lynch had the reputation of having the best-organized “colored” union in the South. According to William F. Fonville, an early Livingstone College historian, as many as 75 members at a time would bring box lunches for the inmates and hundreds of pages of literature, hymn books and Bibles to the poor house.

Mary Lynch died accidentally of gas asphyxiation at her residence in September 1928 at the age of 68. She is buried in the Ninth Street Cemetery, known today as Elmwood Cemetery, in Charlotte.

Her death was nine years after prohibition was ratified in 1919 and five years before it was repealed. She never married and left no close relatives.

The house became the family residence of Frederick D. White, a Livingstone College dean (1935) and John W. Nicholson, chairman of the Price High School science department (1951). Nicholson died in 1966 leaving the property to his wife, Leathia, who died in 1984.

Mary Lynch’s spirit is the soul of the house. She was a moral leader of the Livingstone family during the college’s early days who, along with Price, envisioned temperate ex chattel slaves, their descendants and free people of color building strong Christian families beyond the influence of alcohol.

This was a mission of the African Methodist Episcopal Zion Church and is reflected in Livingstone’s second charter that elevated an institute to a college in 1885. The school was renamed by a charter amendment to Livingstone College in 1887.

In part, the charter states that it is not lawful to receive or use any license to retail spirituous liquors, or otherwise to sell, give or convey to any person any intoxicating liquors within one quarter of a mile.

No evidence of conflicts between the college YWCTU activities and the City of Salisbury could be found. The school was about a quarter of a mile outside the boundary of a town that had a strong liquor industry during the height of the temperance movement.

It is possible for one to imagine an assembly of students and their advisors on the circular front porch before their many trips to the poor house on Old Country Road at the beginning of the 20th century.

Reginald Brown is a local historian.

In Kannapolis, Cruz says he’s the only one able…