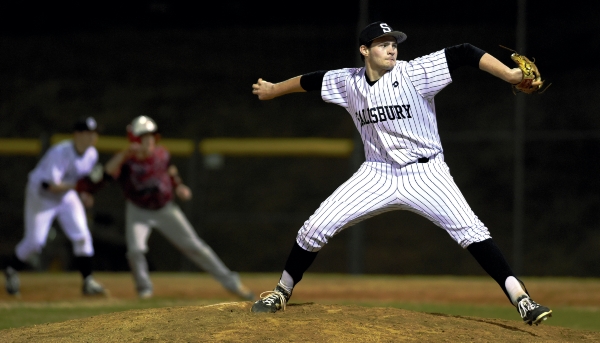 Salisbury's Harrison Smith (11) pitches to a South Rowan batter during the 7th inning of last night’s game. Smith pitched a complete game in the Hornets’ win.

SALISBURY — It was a somewhat historical Wednesday night at Salisbury High’s Robertson Stadium, as the Hornets pounded out 10 hits and thumped county rival South Rowan, 10-4.

The last time a Salisbury baseball team defeated South was way back in 2000. Hornet starter Harrison Smith was one-year-old at the time and most of his teammates had not even been born yet, so this was a win for the generations. Smith, a right-handed senior was more impressed with his team’s current effort than any historical significance.

“This was a really big team effort,” Smith said after a complete game four hitter against the Raiders. “We had good pitch calling, played good defense in the field  and hit the ball really well tonight. Those insurance runs in the fifth were very big and that was a huge hit by Link.”

Smith was referring to the clutch and decisive bottom of the fifth inning after South had scored two runs in the top half to climb within 5-3. Chandler Lippard led off with a walk, Smith was plunked by a pitch and John Yang punched a single to short left field to load the bases.

Senior outfielder Alex Link stepped in and apparently got the pitch he was seeking from Raider reliever Tyler Belk. Link promptly boomed a double to the deep gap in right-center to clear the bases and make the score 8-3.

“It was sort of middle in, ” Link said of the pitch. “I usually get good pitches there that I like. I was just trying to hopefully put it in play and maybe get a base hit.” What Link got instead was the key hit of the game to reclaim the momentum for the Hornets (2-1) and pad the lead.

Senior outfielder Alex Yang added insult to injury with a two-run opposite field single to complete his perfect 3-for-3 night with three RBI, that upped the score to 10-3. “I saw the ball good tonight,” Yang said, “and I tried to hit it the other way when I could. I really like this team because when one person hits, the rest of us start hitting. It is contagious.”

South (3-2) did make it 10-4 in the top of the sixth on a bloop RBI-double by Chandler Norton but Smith recorded the last five outs in an efficient manner to notch his first win of the season on a 95-pitch , five-strikeout effort.

First-year Salisbury coach Mike Herndon praised Smith for mixing his pitches effectively and keeping the Raider hitters off stride. “They really didn’t square any balls up on him the whole game,” Herndon said. “He rolled over a bunch of balls and really had his change-up working.”

The Raiders actually took the early lead in the game, 1-0, with a walk and a Hornet error in the top of the first. Belk brought Dillon Norton home on a fielder’s choice. But Salisbury seized the momentum right back off South starter Bo Corriher in the bottom of the first on a two-run single by freshman catcher Bo Rusher.

Salisbury made it 4-1 as Corriher uncorked a pair of wild pitches and was called for a balk. Alex Yang made it 5-1 in the fourth inning by driving in his brother, John, with two outs.

South made a solid rally effort in the top of the fifth frame off Smith as an Austin Hyde lead-off double and a pair of fielder’s choice grounders scored one. Shortstop Peyton Penninger then drove in another with a single to cut the lead to 5-3. But Smith slammed the door with a called third strike against Colson Childers that left the bases loaded.

When the Hornets then responded with their five-run fifth, the outcome was decided.

“We just didn’t play well enough to win tonight,” Raider coach Thad Chrismon said as his team dropped their second game of the season in as many nights. “But we are going to go back to work tomorrow and practice and try to get better.”

Herndon was especially pleased with the attitude of his team in the game. “Offensively, when we gave something up, we came out and answered right back.,” he said. “But that is what good teams do. I am trying to teach my kids that each time we come out, we’re not hoping to win, we are expecting to win. That is the only way I know how to operate.”

The Hornets will jump right back into action tonight with a county-rival game at West Rowan at 6 pm. South will get back into South Piedmont conference competition Friday night at Cox Mill.