Return of the keys: downtown piano project to have second year 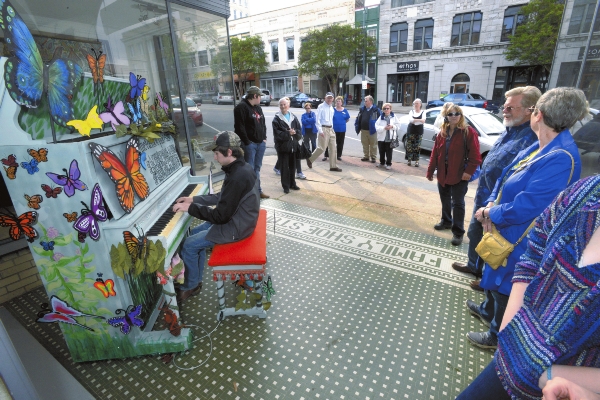 In this 2015 photo, Joseph Steward, then a junior at West Rowan High School, plays the piano West students adorned in the ‘metamorphosis’ theme for the ‘ Come Tickle Our Ivories’ project, which placed pianos decorated by high school students around downtown Salisbury and made them available for anyone to play. The project is set to return in May for its second edition, this time with pianos decorated by middle school students. File photo by Wayne Hinshaw/For the Salisbury Post

SALISBURY — In Summer 2015 downtown Salisbury was filled with music and the tinkling of black and white keys. Public pianos, provided by the Salisbury Symphony as part the “Come Tickle Our Ivories” project, graced street corners or were tucked away under overhangs.

It was a peace offering, a chance for people from Salisbury and the county to interact, sing and be bound by music.

“The idea of pianos is it’s interactive,” organizer Mary Miller James said. “People can sit down, play, do something with these public art pieces.

This May, the pianos are returning. Eleven pianos are currently housed at middle schools around the county, being sanded, primed and painted for their big debut. All of the pianos were donated from local people or churches.

Miller James said that the response to last year’s Come Tickle Our Ivories was overwhelmingly positive, and she’s had people asking if the project will continue. James jokes that she has enough pianos to cover the project in 2017, if she chooses to continue it.

“You would be amazed how many people want to donate pianos,” Miller James joked.

She got the idea from her sister, who brought street pianos to Lynchburg, Virginia. But public music has been a catching idea since 2008, when London artist Luke Jerram sought to create public art pieces to promote interaction. That project was called “Come Play Me, I’m Yours.” Since then, the idea has hopped continents, rooting in unexpected places. Miller James says similar projects have taken off in Australia, New York, Denver, Seattle and San Francisco.

And after her sister brought the project in Virginia, Miller caught the bug.

“I said, ‘Oh, that’s so cool! I’m going to bring that to Salisbury,” Miller James remembered.

That first year, Miller James partnered with the Salisbury Symphony. She’d served on the board for six years, but was taking a break in 2015 when the project cranked up.

“I just love this idea of pianos for public art,” she said.

Taking after her sister’s twist on the art piece, Miller James had the instruments donated and delivered to public high schools, so that students could showcase their art.

And while the students painted, Miller James collected donations.

“I was shameless,” she said.

Miller James raised about $9,000 by sending out calls, letters and e-mails. She even asked her dentist for a donation – all for a good cause.

“Whatever money we raise I want to give back to the art departments of the schools,” she said.

Teachers are always digging into their own pockets to provide supplies, Miller James said, and she wants to help out any way she can. This year, the project received donations from Walmart to cover the needed art supplies and got free tarps from Lowes. Any money left over will go to fund symphony youth programs.

And when the season closed out in September, the schools took the pianos back.

“It’s wonderful, they have a second life,” she said.

The pianos’ big debut will be Friday, May 6.