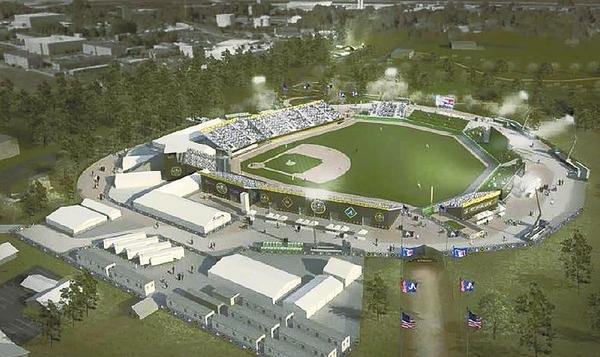 MLB via AP ... This artist’s rendering provided by Major League Baseball shows a proposed baseball ballpark at Fort Bragg, N.C. The Atlanta Braves and Miami Marlins will play on the U.S. military base on July 3.

NEW YORK (AP) — The Atlanta Braves and Miami Marlins will play on the U.S. military base at Fort Bragg, North Carolina, on July 3 in a 12,500-capacity ballpark to be built with funding by Major League Baseball and the players’ association.

The ballpark will be converted to a softball field and multi-purpose facility after the game.

The matchup originally was to be played at Atlanta’s Turner Field, and the Braves will remain the home team. The game will be televised by ESPN as part of its Sunday night baseball schedule.

Baseball Commissioner Rob Manfred said in a statement Tuesday that it will be “a unique event that will benefit the men and women of Fort Bragg and their families for many years.”

Marlins manager Don Mattingly said the game is a chance to honor the soldiers on the base.

“It feels good to be able to go,” Mattingly said. “There are a lot of heroes there. Some of those guys have paid a heavy price.”

He expects an even greater thrill playing at Fort Bragg.

“It’s going to be pretty awesome,” Pierzynski said. “To play in front of the troops, that’s kind of what you do this for. Because those guys are the real heroes. What they do protecting us and defending out way of life every day is pretty amazing.”

Col. Brett Funck, the garrison commander at Fort Bragg, thanked baseball and the union “for their support to our service members and families.”

“This historic event and the converted multipurpose facility will have enduring benefits for our entire Fort Bragg community for years to come,” he said.