In Kannapolis, Cruz says he’s the only one able to beat Trump 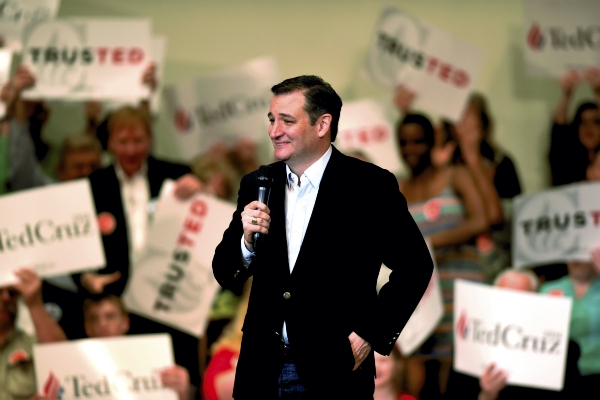 U.S. Sen. Ted Cruz, who is seeking the Republican Party nomination for president, made a campaign stop at Central Baptist Church in north Kannapolis on Tuesday. His was the second rally in as many days held in the area by a GOP presidential contender. Businessman Donald Trump appeared in Concord on Monday. Jon C. Lakey/Salisbury Post

KANNAPOLIS — Republican presidential candidate Ted Cruz says he understands why so many people are drawn to businessman Donald Trump.

Voters are angry at politicians who make promises, go to Washington D.C. and reverse course on previous commitments, Cruz said Tuesday to a standing-room-only crowd at Central Baptist Church.

“I understand being angry because you know what, I’m angry too,” Cruz said. “I understand if you’re angry with Washington, then Donald can seem appealing because he is a loud, angry, often profane and cursing voice that can be seen as a vessel for that anger. But here’s the simple, undeniable truth: If you’re frustrated with the corruption of Washington, you don’t solve that problem by voting for someone who has been enmeshed in the Washington corruption for 40 years.”

In his southern Rowan County campaign stop, Cruz, a U.S. senator from Texas, spent a lengthy amount of time framing himself as the only Republican candidate able to beat Trump. Cruz noted his victories in multiple primaries and said Trump would surely lose to Democratic presidential candidate Hillary Clinton in the general election. Cruz also stressed Trump’s previous support of Democrats, including Clinton.

“Now, if you’re fed up with the corruption of Washington, the answer is not supporting someone who has been funding and profiting off of that Washington corruption,” he said.

Although recent polls continue to show Trump leading Cruz in North Carolina, the Texas senator framed himself as being tied for the lead in the Tarheel State.

At one point, Cruz criticized a recent move by Trump to ask rally attendees to pledge their support. During Trump’s rally in Concord on Monday, for example, he asked rally attendees to raise their hand and repeat a short statement. Kings and queens asked their subjects to pledge support, Cruz said.

“I’m not here asking anyone to pledge your support,” he said. “I’m here pledging my support to you.”

Throughout the rally, Cruz drew raucous applause from the capacity crowd, which included a number of elected officials from Rowan County. County Commissioner Mike Caskey and multiple Rowan-Salisbury school board members attended the event, including Travis Allen and Chairman Josh Wagner. School Board Vice Chairman Dean Hunter is an associate pastor at Central Baptist Church.

Wagner said he likes Cruz because the Texas senator seems to be the most conservative candidate in the Republican field. Hunter declined to say which candidate he liked best. Hunter said neither he nor the church was endorsing Cruz by hosting the event.

State Rep. Carl Ford, R-76, sat just feet away from where Cruz stood during his speech. Ford said he was invited to Tuesday’s event. However, he’s also a Cruz supporter. Ford said he likes Cruz’s proposal to eliminate the Internal Revenue Service and allow Americans to file taxes on a postcard-sized form.

When Cruz delved into policy positions, he drew significantly louder applause than any Trump criticism. He specifically focused on three topics — jobs, freedom and security. Multiple times, Cruz said he wouldn’t compromise on issues he feels strongly about.

“Did you notice in the last debate how many times Donald said he would be flexible?” Trump asked the crowd. “Let me tell you: Flexible in D.C. is a code word for they’re getting ready to stick it to you. Somehow flexibility always means cutting a deal.”

When talking about freedom, Cruz said he wouldn’t “compromise away religious liberty” or Second Amendment rights. He also briefly focused on a vacancy in the U.S. Supreme Court created by the death of the late conservative Justice Antonin Scalia.

“It is not one branch, but two branches of government that hang in the balance,” Cruz said. “We are one liberal justice away from a radical, five-justice, left-wing majority the likes of which this nation has never seen. We are one justice away from the Supreme Court stripping away religious liberty from every person in this country.”

Cruz said he’s been told by Trump that “you’ve got to be willing to compromise” when it comes to religious liberty in the Supreme Court.

He ended by focusing on America’s security. If he is elected president, Cruz said America will strongly support its ally Israel and rebuild its military.

Cruz is among several candidates coming to North Carolina this week. Trump held an event at the Cabarrus Arena and Events Center. Clinton is scheduled to be in the state on Thursday.

Cruz is scheduled to return to  the area on Sunday. He’ll be at the Charlotte Motor Speedway in Concord.