Prep Baseball: West has a chance to repeat in SPC 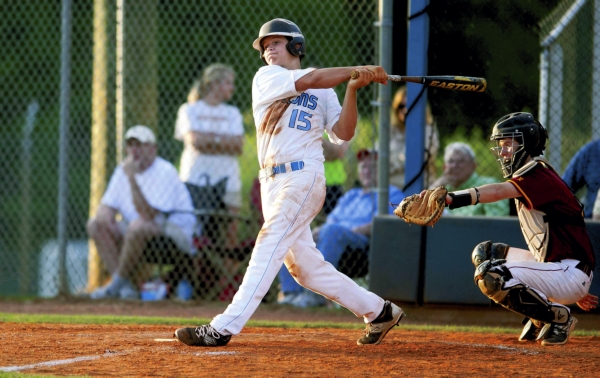 West’s Kacey Otto gets a hit as West Rowan baseball defeated Hickory High school in state playoffs on May 12, 2015.

MOUNT ULLA — West Rowan won its last 10 league games in 2015 and claimed a runaway championship in the South Piedmont Conference with a 13-3 record.
After their first league title since 2006 was in the books, the Falcons embarked on a playoff run that lasted until the the fourth round. Even the game that ended the fun was impressive, a hotly contested, walk-off loss at Marvin Ridge, the eventual 3A state champion.
It was an exciting 20-7 season in Mount Ulla. First-year coach Seth Graham was everyone’s coach of the year, and deservedly so.
Now the Falcons will try to provide an encore. Expectations are high. West was ranked seventh in Impact Baseball’s 3A preseason poll, two spots ahead of Carson.
There’s little doubt that West will be good, but the lineup is missing outstanding players.
Third baseman Juan Garcia and right fielder Harrison Baucom are gone, and they keyed West’s offense. Shortstop Jeremy Simpson is gone, and he keyed West’s defense. Omar Bautista is gone, and he was the top pitcher in the SPC.
“We’re fortunate that we had older guys as good as they were,” Graham said. “I don’t know how you replace them, but I really do like my team. We’ve still got some good players. We’ve also got new guys who can play.”
Even with Garcia and Baucom, the Falcons didn’t overpower opponents in 2015. The team batted a modest .257 with five homers. What West won with was pitching (2.01 team ERA), defense and speed.
It’ll be all about pitching, defense and speed again. The Falcons have fast athletes in the outfield where right fielder Caleb Link (19 runs), center fielder Kacey Otto (.273, a team-high 19 RBIs) and left fielder Lee Poteat (.234, 8 RBIs) could form 75 percent of a decent track relay team. When they’re on the bases, they’ll try to rush opponents into mistakes.
West had to make a change when Link got hurt last season, shifting Poteat from catcher to left field and bringing up jayvee Trevor Atwood to catch. It worked out. Atwood (.333, 6 RBIs) did fine, and now Graham knows he can count on him.
“We didn’t lose a league game with Atwood catching,” Graham said.
West’s infield will look different, with Brandon Walton taking over at third base and Brett Graham stepping in at shortstop. Both juniors are left-handed hitters.
“We were in a position last year where Brandon and Brett were able to play jayvee as sophomores, but on most teams they would’ve been varsity players,” Coach Graham said. “They can handle the bat and we’re pleased with how they’ve played defensively.”
Junior Austin Love (.234, 10 RBIs) will be one of the county’s top pitchers, but the Falcons also are counting on his bat and glove. The plan is to save wear and tear on Love’s powerful right arm by putting him at second base, where the throws will be short.
First base is the only spot where Graham hasn’t decided on a full-time starter. Jonathan Luther, a senior, has handled first base in the early going.
West should have a wonderful 1-2 pitching punch in Love, who is verbally committed to UNC, and Bryan Ketchie, a senior lefty who has signed with Catawba.
Love struck out 14 of the 18 batters he faced in his season debut against Northwest Cabarrus. Love was 6-3 last season with a 2.39 ERA. Ketchie was 4-3 with a 2.19 ERA last spring and continued to progress during his sensational summer with the Rowan County American Legion team.
There’s a small army of arms behind those two, including Brett Graham, Walton, Link, 6-foot-2 sophomore Olen Stamper and Tyler Wheeler, a 6-4 junior who has been a pleasant surprise.
West lists 12 of the 18 players on the varsity roster as pitchers.
“We’ve got a lot of pitchers, but most of the time our bullpen is going to be in the field instead of warming up,” Coach Graham said. “That’s not ideal.”
West already has won two SPC road games, a relatively easy one at Robinson and Friday’s 10-inning fight at Northwest Cabarrus in which Love, Stamper and Walton held the Trojans to one run.
West dropped a non-conference game at Mooresville on Saturday.
“We’ve shown signs of greatness at times,” Coach Graham said. “At other times, we’ve shown some inexperience.”
•••
NOTES: Walton is off to a 5-for-11 start at the plate, while Love has six RBIs. … This will be a big week in the SPC for West. The Falcons visit South Rowan tonight and they host Carson on Friday.