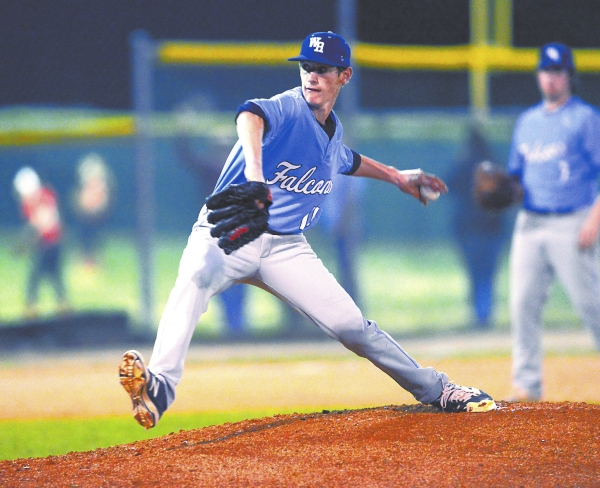 LANDIS — Bryan Ketchie had pitched six great innings, but it was still an easy decision for West Rowan coach Seth Graham to turn to Austin Love when Ketchie ran into trouble in the seventh.
“Bryan had basically won the game for us, and I didn’t want to put him in a position where he might lose it,” Graham said. “Facing Austin is a hard adjustment for hitters.”
Love, a junior committed to UNC, got a game-ending strikeout with the bases loaded, and earned a save in West Rowan’s 3-0 South Piedmont Conference victory at South Rowan on Tuesday.
It was the pitching duel everyone expected, with South lefty Blake Johnson, a Belmont Abbey commit, battling Ketchie, a southpaw headed to Catawba, in a string of fast-paced, early-contact innings.
“Blake pitched well enough for us to win,” South coach Thad Chrismon said. “We just didn’t help him out enough at the plate and we didn’t make quite enough plays in the field.”
South (3-1, 2-1 SPC) had eight singles and had five leadoff hits against Ketchie, but the lefty kept putting zeroes on the scoreboard.
“It seemed like South got a hit an inning,” Ketchie said. “But we finally got that first run, and that’s always the best run. That run gave us the momentum, and we kept it.”
That first run came in the third. Lee Poteat singled with one out and stole second, and Kacey otto delivered the solid, two-out single to left-center that brought the speedster home.
“I had two strikes on me and Blake can really locate the ball,” Otto said. “I just had to fight up there. Fortunately, I got a pitch to hit.”
West turned a 4-6-3 double play to help Ketchie in the fourth, and South leadoff man Dawson Larrimore lined out hard to end the bottom of the fifth with a runner on base.
“It was good to see us play a strong defensive game,” Graham said. “We’ve had a few hiccups.”
Then West made it 2-0 in the sixth. Love reached on an error to start the inning, advanced on one of Trevor Atwood’s three hits, and scored on Olen Stamper’s single.
West bumped its lead to 3-0 in the seventh against reliever Dillon Norton with the assistance of two errors that sandwiched a solid hit to right by Brandon Walton.
Then it was time for the bottom of the seventh.
“Ketchie had been cool and collected all night in some tough situations against a very good ball club, and he really wanted to finish,” Graham said.
But then Ketchie got into a jam. Peyton Penninger drilled a solid single to left, and then Austin Chrismon hit a ball in the hole that shortstop Brett Graham had no play on. With two on and none out, Graham handed the ball to the flame-throwing Love, who had been playing second base.
“There was no doubt in my mind,” Ketchie said. “In that situation, give Austin the ball.”
Atwood, West’s catcher, said Ketchie had been sharp all night, but he also knew it was time to make the switch.
“I’ve got all the confidence in the world in both of those pitchers,” Atwood said. “But when you’ve been trying to hit Ketchie all night, it’s really hard to catch up with Austin’s velocity. It’s a drastic speed change.”
Love struck out Shaggy Wyatt for the first out. Then Tyler Shephard hit a fly ball. With the Raiders down to their last out, Larrimore walked, and the tying runs were on base.
Love wasn’t rattled, though. He struck out Tyler Rary to end the game.
“We had good starts to a lot of innings,” Chrismon said. “But we just never could put anything together until the seventh. It was a good early-season battle, and I’m sure there will be a lot more battles to come.”
West Rowan (3-1, 3-0 SPC) and East Rowan, a 10-6 winner over Concord, ended the night in a tie for first place in the SPC.
•••
NOTES: Poteat hit a line-drive double that ricocheted off Johnson to start the game. … Rary had two hits for South. … South plays tonight at Salisbury at 6 p.m. Bo Corriher will be on the mound for the Raiders.