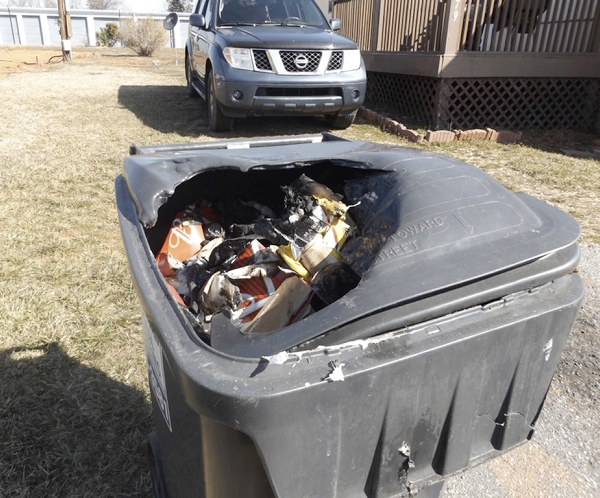 Rowan County Sheriff's Office Investigators found this partially burned trash container in the yard of a home where a meth lab was found.

Evidence of a large scale meth lab was found inside and outside the house, including “one pot shake and bake” laboratories, gas generators, methamphetamine precursor materials, methamphetamine oil and finished batches of methamphetamine. Outside, investigators discovered a trash can that apparently caught fire with a lid partially melted from discarded items used to make methamphetamine.

John Lowell Hopkins Jr., 40, lived at the house and Richard Thompson, 45, a Concord resident, was inside the home when the search occurred.

A loaded handgun was found inside a Nissan SUV parked near the door of the home. The car belonged to Hopkins, a previously convicted felon, who is prohibited from possessing a firearm.

Thompson was arrested on misdemeanor warrants from Cabarrus County.

He was placed in the Rowan County Detention Center under a $200,000 secured bond. Rowan County Sheriff’s Office The gun was found inside this SUV parked outside a mobile home on Sechler Street in China Grove. Numerous one-pot meth laps were also found.