Greens — celebrated throughout the South 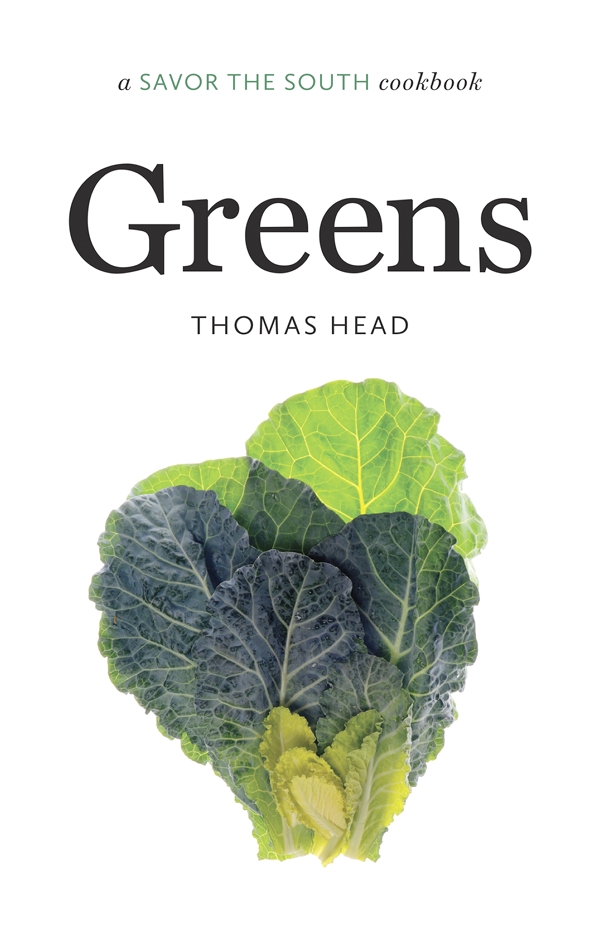 'Greens' is the latest in the Savor the South series from the University of North Carolina Press.

Well here it is, the little cookbook that collectors of the Savor the South series have been waiting for, “Greens.”

Greens are not just a side dish in the South — they are a calling. People feel passionately about what the word greens means. Are your greens collards? Turnips? Mustard? Or have you gone trendy into kale and chard?

Well, author Thomas Head is sticking with the basics, filling the book with mostly collard green recipes, though several let you pick from collard, turnip, beet, mustard or kale. Some venture out into greens you might not think about, like dandelion. And he includes recipes from Africa, India and other exotic places where greens are important.

He’s from Louisiana and grew up with turnip greens, which he writes, bridged the gap between late fall and early spring, when there wasn’t much green to be found.

He cites scholarly works such as “Collards: A Southern Tradition from Seed to Table,” in which two professors share vast stores of knowledge about well, you know. They claim there’s a collard core that includes the eastern two-thirds of North and South Carolina, as well as Tidewater Virginia and northern Georgia.

At the same time, they say, there’s a collard domain, where collards share the plate with turnips and mustard greens and that includes the Carolinas.

Head lives in Washington, D.C., and is a food writer who once did restaurant reviews. He is co-editor of “The Happy Table of Eugene Walter: Southern Spirits in Food and Drink.”

Speaking from my limited experience as a Yankee, (all we ever had was spinach), I’ve seen lots of kale at the Farmers Market in recent years, as well as truckloads of collards, along with turnip and mustard greens to a slightly lesser extent. Not many people I’ve run into eat beet greens. In the fall, it’s not uncommon to see people lining up to go through the baskets and boxes of greens, armed with  gigantic plastic bags that they stuff full.

Head says poor Southerners also learned to harvest wild greens, such as the dandelion, along with poke sallet, creasie greens, watercress and others. It was a easiest way to get some green nutrition in the diet.

Greens have come to be associated with money, hence their popularity as part of a New Year’s meal. Head says some people believe hanging a collard leaf over your door will keep evil away. And putting a collard leaf on your head is said to cure a headache.

The Greeks and Romans grew collards and took them along as they conquered Europe, Head writes. The Celts might have already had greens. So collards were around long before the African American slave trade, though greens were also popular in those countries. Once in America, the seeds of African greens grew well, and greens became a staple in the diet.

Turnips are an ancient crop, as well, throughout Europe, while mustards might have come from the Himalayas. Mustard is a big part in many cuisines, from India to Japan to South America.

Head points to how many cultures use greens in their cooking, from the French and Italian, to the Japanese, Chinese and Thai.

But his favorite food, without doubt, is the southern food he grew up with, the cornbread, the fried chicken and the turnip greens swimming in that intoxicating pot likker.

The recipes he shares go from basic to downright unusual, like West African Greens and Peanut Stew. It’s full of things that are good from you and gets heat from ginger and red pepper flakes. There’s also Miang Kham, a Thai dish full of sour, bitter, sweet and salty tastes wrapped up in a collard leaf.

And if you’re looking for ways to celebrate collards further, Head includes a list of festivals devoted to that Southern, leafy green.

If you’ve built a collection of these slim cookbooks, you now have  a more-than-complete meal, with the recent “Barbecue” and the previous “Beans and Field Peas” and “Catfish” and “Sweet Potatoes.,” to name a few.